Let’s go back to December 2018. The market was rapidly falling, the fear was palpable, there was blood in the streets … and then what happened?

The Fed capitulated on their rate hike schedule. The market cheered and rallied from a V-shaped bottom back to the previous all-time high.

Everyone likes a rally, but let’s take a look underneath the surface of the market to see just what is going on.

I will show you multiple signs that I am seeing that indicate significant underlying momentum in all of the “risk-off” assets, meaning that traders are building positions in safety assets for what they see coming next.

First up is the U.S. Dollar Index, trackable via the $DXY. Typically, the USD getting a bid indicates a slight flight to safety trade and will put pressure on certain assets like commodities. 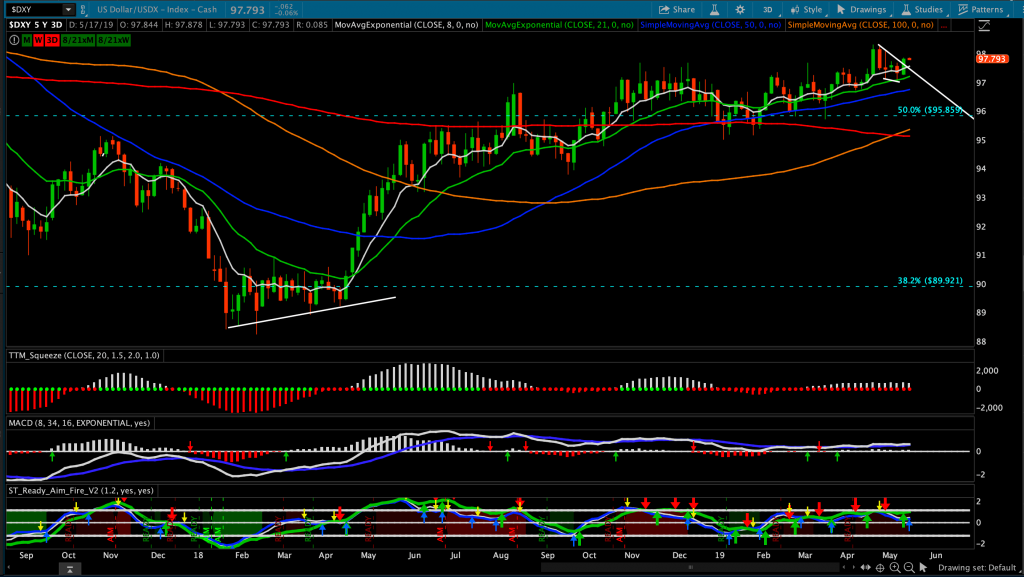 On this weekly chart of the dollar I see a couple of signs indicating much higher prices ahead. We have a weekly and monthly squeeze in play as well as a daily. On the weekly chart, we now have a full bull stack on the EMAs, meaning that the shortest term EMA is above the longest term, with significant focus on the 100/200 cross which happened recently. We are holding trend and have a major RAF buy signal on the weekly, too.

This chart is ahead of the next chart we will look at which is bonds. 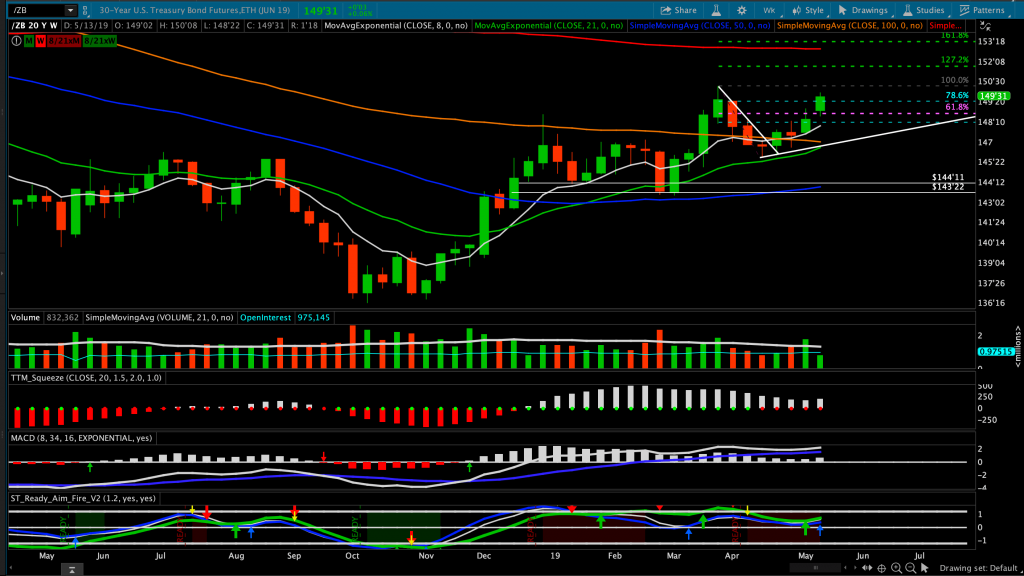 Here we have weekly 30-yr bonds, charted via the /ZB futures contract. We see almost an identical setup to the Dollar Index, but a bit behind in terms of structure. Meaning that the dollar is leading bonds. The story on this chart is the same, good underlying weekly momentum. Squeezes all over the place. Holding both EMA and Fibonacci retracements with a series of higher highs and higher lows.

Bonds are the traditional safe haven for professional traders. If the market will rally, they will sell bonds and buy equities. If they expect the market to move lower, they will sell equities and buy bonds. That is what we are seeing here and the momentum hasn’t even fully kicked off.

Next up, we have the Japanese Nikkei. Why do we look to Japan for information? Because they are one of the weakest Asian markets and will be the first to show the hand of the market. 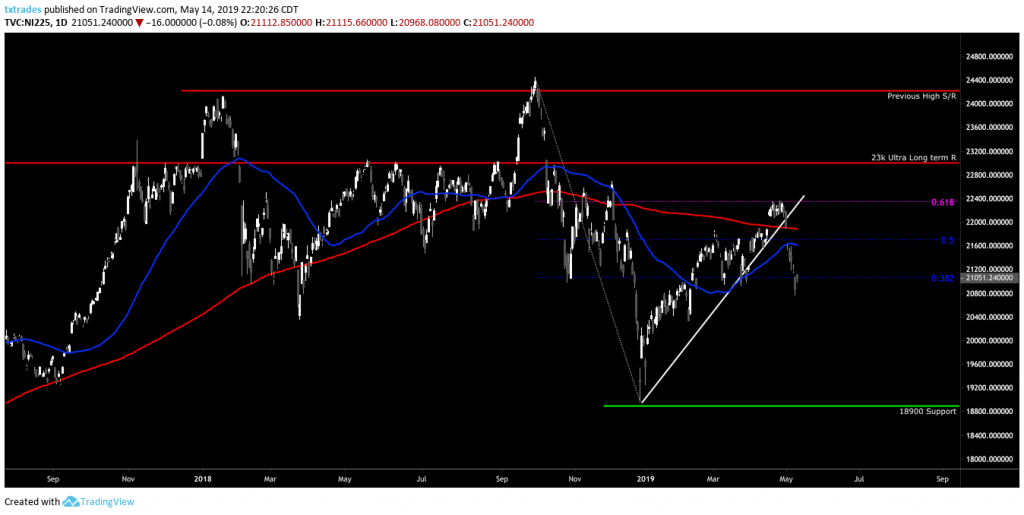 On the Nikkei, this is what I see. An intermediate top rejection at 24k. A rejection of the ultra-long-term top at 23k. Support at 19k.

Analyzing the bounce off the 19k level we can see that it failed at the key .618 Fibonacci level after trying many times to get through. I don’t see support on this chart in any significant fashion until the previous lows at 19k. That implies about a 10% down move to retest that support level.

If the Nikkei cannot hold a bid and is failing at all the key retracement levels that does not bode well for global markets and is a leading indicator for our markets in the States.

Let’s look at one more chart to tie it back to where we started, the December lows. 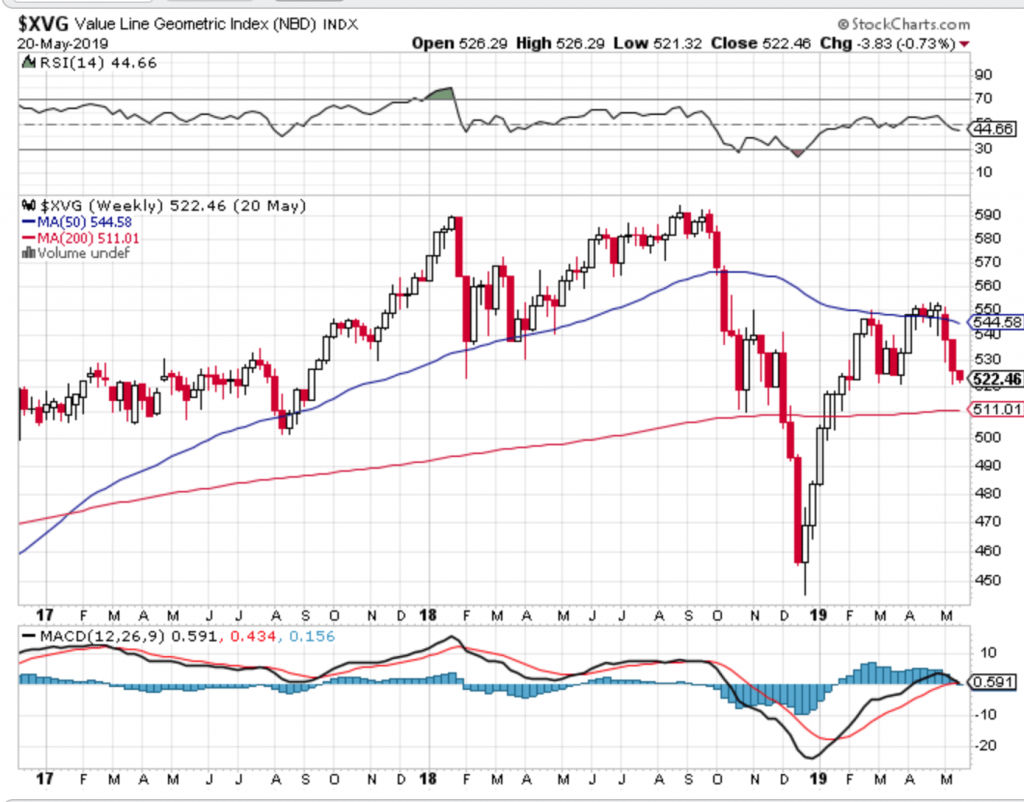 This is the $XVG index. The purpose of this index is, basically, to smooth out the effects of mega-cap stocks driving the trade.

If traders pile in to just a handful of megacap tech, for example… Amazon, Apple, Microsoft, Google, and Facebook… the size of these companies combined with their weighting in the S&P and the Nasdaq will drive the indices higher. The problem with that is that it can “mask” structural weaknesses as the market is being powered by just a handful of stocks while the others trade sideways.

When this happens, it can create hidden “air pockets” underneath the market as the current index prices are largely a function of those megacap techs.

The $XVG index smooths all that out and allows us to see the market in a balanced fashion. By doing this we can see that the market made a double top last year and the December rally has made a lower high.

This chart should look like the S&P with a high last year and a similar high this year; however, it does not. It looks more like the Russell. This is a problem because it highlights that the drivers for the market off the lows have been just a handful of stocks.

This creates the air pocket we talked about if these megacap techs ever stop being bid higher.

Putting it all together… we have the U.S. Dollar leading bonds higher. Both of these are showing early stage momentum. If the weekly momentum triggers we are seeing fire long on these charts that will lead to significant pressure on the equities markets.

The equity markets do not have the structural integrity below price to support a drop and will actually exacerbate the move as the rotation from equities to bonds picks up steam.

Given the totality of what I am looking at, combined with the catalysts from the China trade deal the market is Wile E. Coyote, he has run off the cliff and is able to levitate as long as he doesn’t look down.

The moment he looks down is when gravity kicks in. 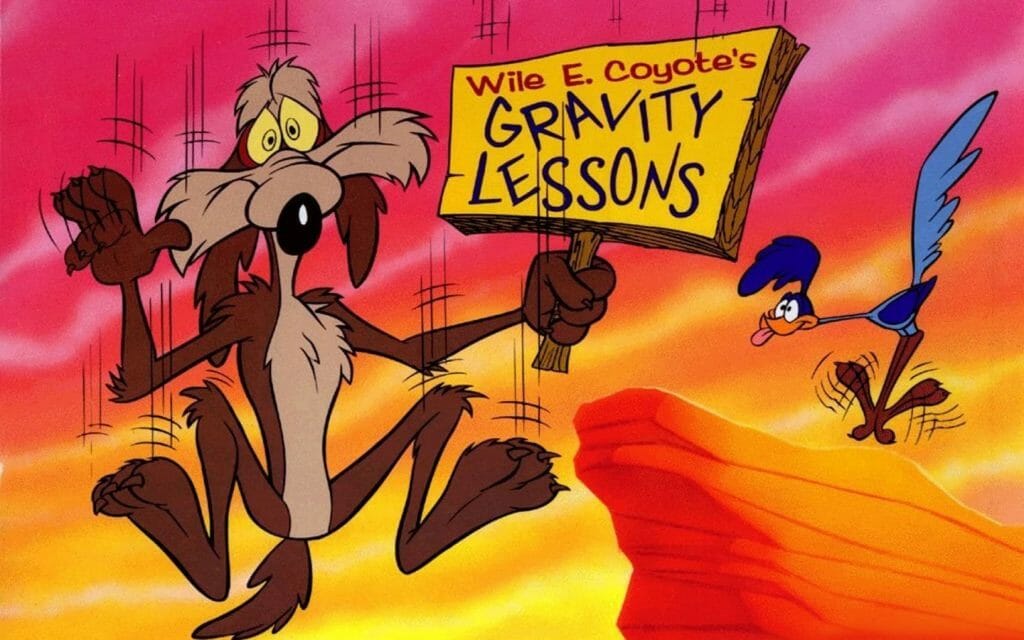