The Bond Market vs. The Fed and China

2019 began just as everyone predicted, the Fed capitulating on rate hikes for the year and even hinting that a reduction in rates was possible. Of course, we’re only kidding as many traders were caught wrong-footed by the quick change in sentiment.

The catalyst for this major pivot from Fed was likely the market drop from October to December and the reactionary Fed decided to soften the tone around rates. As always, the markets love cheap cash and we saw a sharp rally off the lows after the “Powell Put” was introduced.

While the market cheered the Fed decision on pausing future rate hikes, we must ask ourselves what risks are prevalent in the markets and what does that mean for stocks and the indices.

Let’s look at a couple of important, and major, market signals as to what could be around the corner.

We can look at bonds a number of ways from TNX (10-yr treasury yield) to TLT (long bond ETF) or /ZB (futures contract for the 30-year bond), I will primarily focus on the /ZB futures contract.

Looking at /ZB on a monthly chart I first notice that the 100EMA has held as support since 2002. That’s important because looking at the current position of the chart, where price dipped below that support, held, and reversed higher… that can create a “spring” effect as longs get stopped out and new shorts get in and get trapped. That pattern combined with the early momentum signals on the monthly chart imply that bonds want to test higher.

If bonds go higher (and yields lower) that historically has had negative implications for the market and equities as long bonds is the “flight to safety” trade. 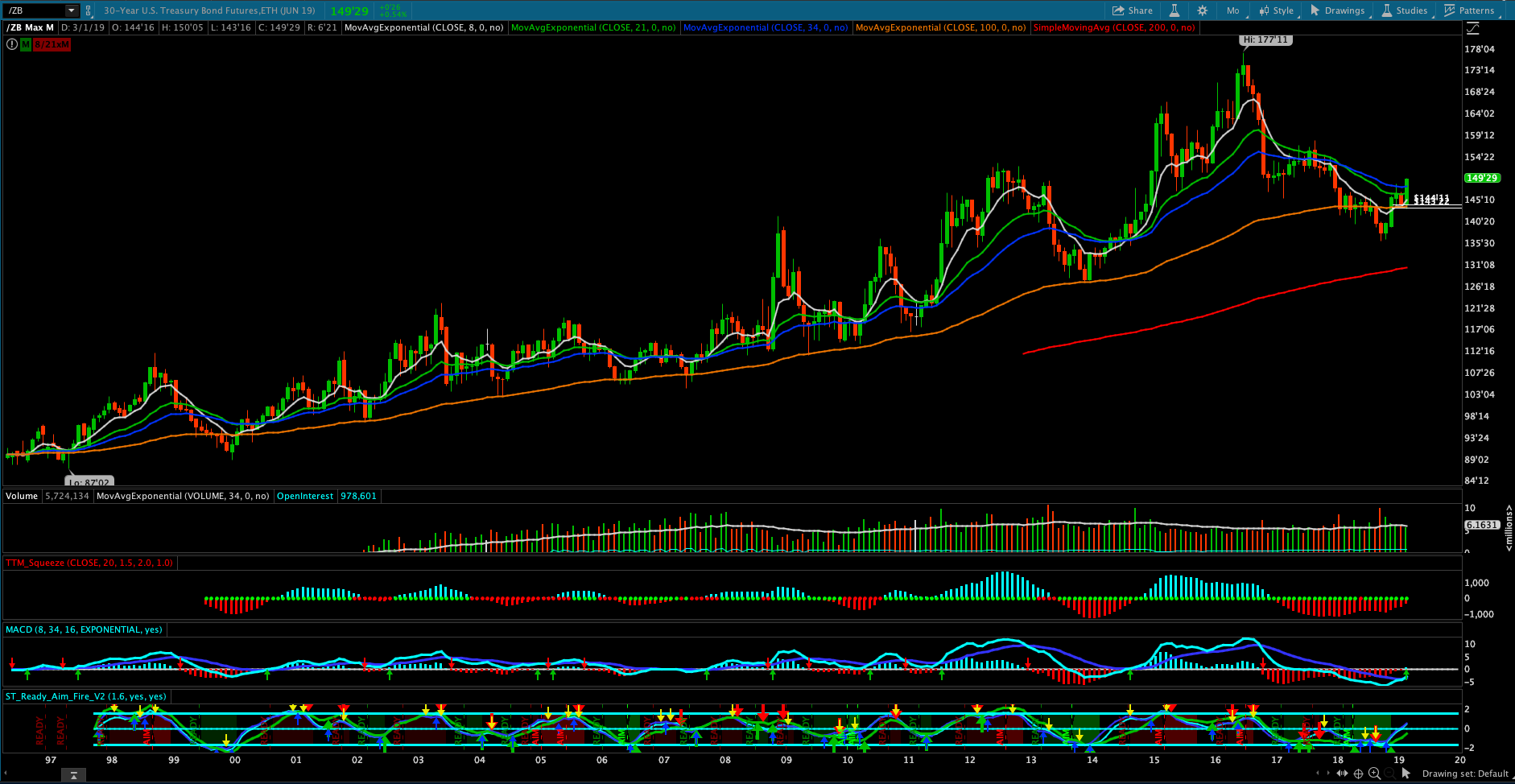 The next chart to focus on after bonds is the chart of the U.S. Dollar. This is another flight to safety style trade and again has negative implications for the market, especially commodities. 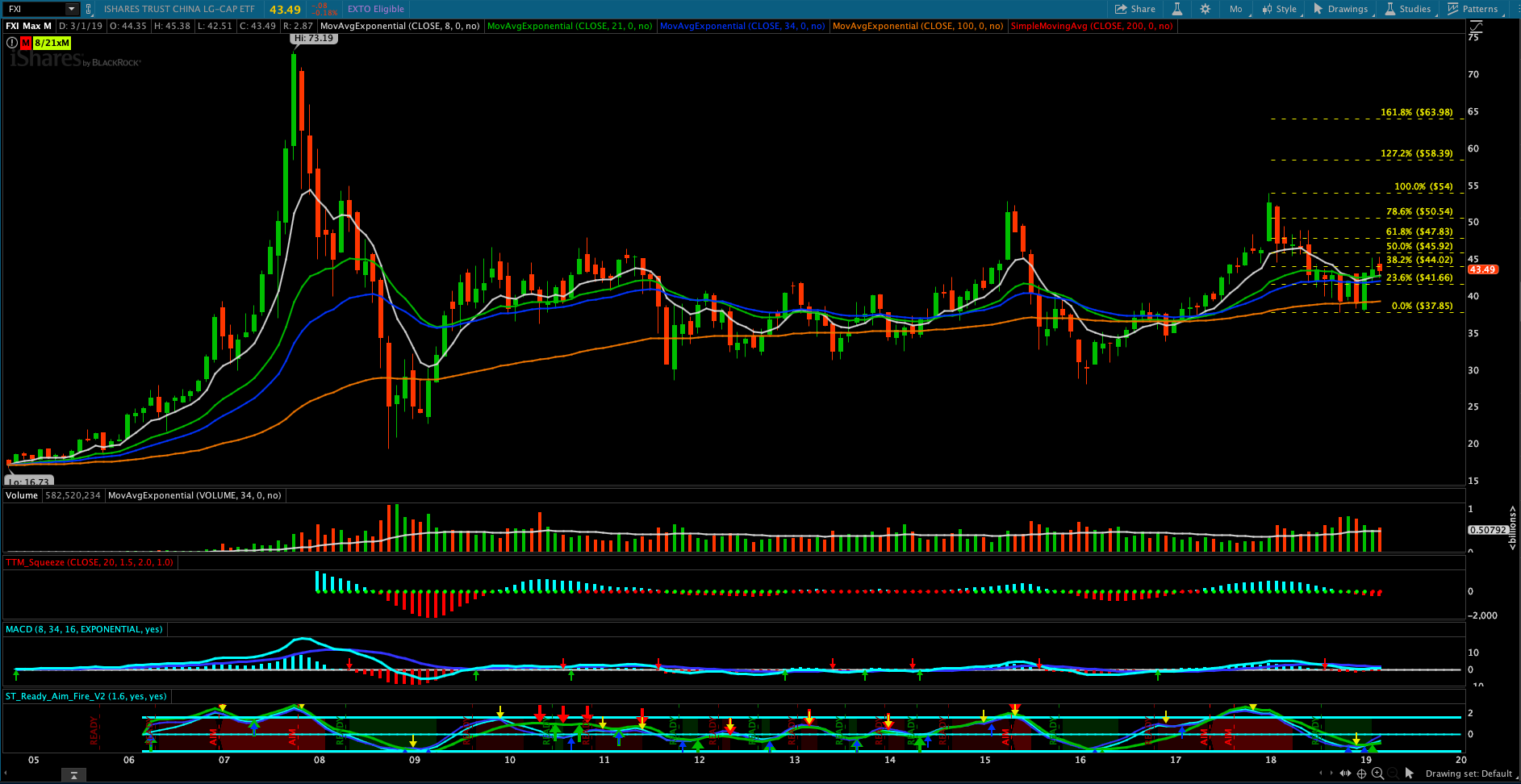 While the monthly setup on the Dollar is still a work in progress, the daily chart is showing some EMA organization and momentum to the upside. These two trades, bonds and Dollar, work together. If we see continued pressure upwards on these two charts it will put pressure on equities and commodities while bonds and Dollar rallies.

Next chart to focus on is the VIX. If we are anticipating more volatility, as the battle between bond bulls and equity bulls rages on, VIX will be a key chart. With a historical low around 12, and currently trading around 15, the VIX is vulnerable to the narrative we started with around bonds and the Dollar. 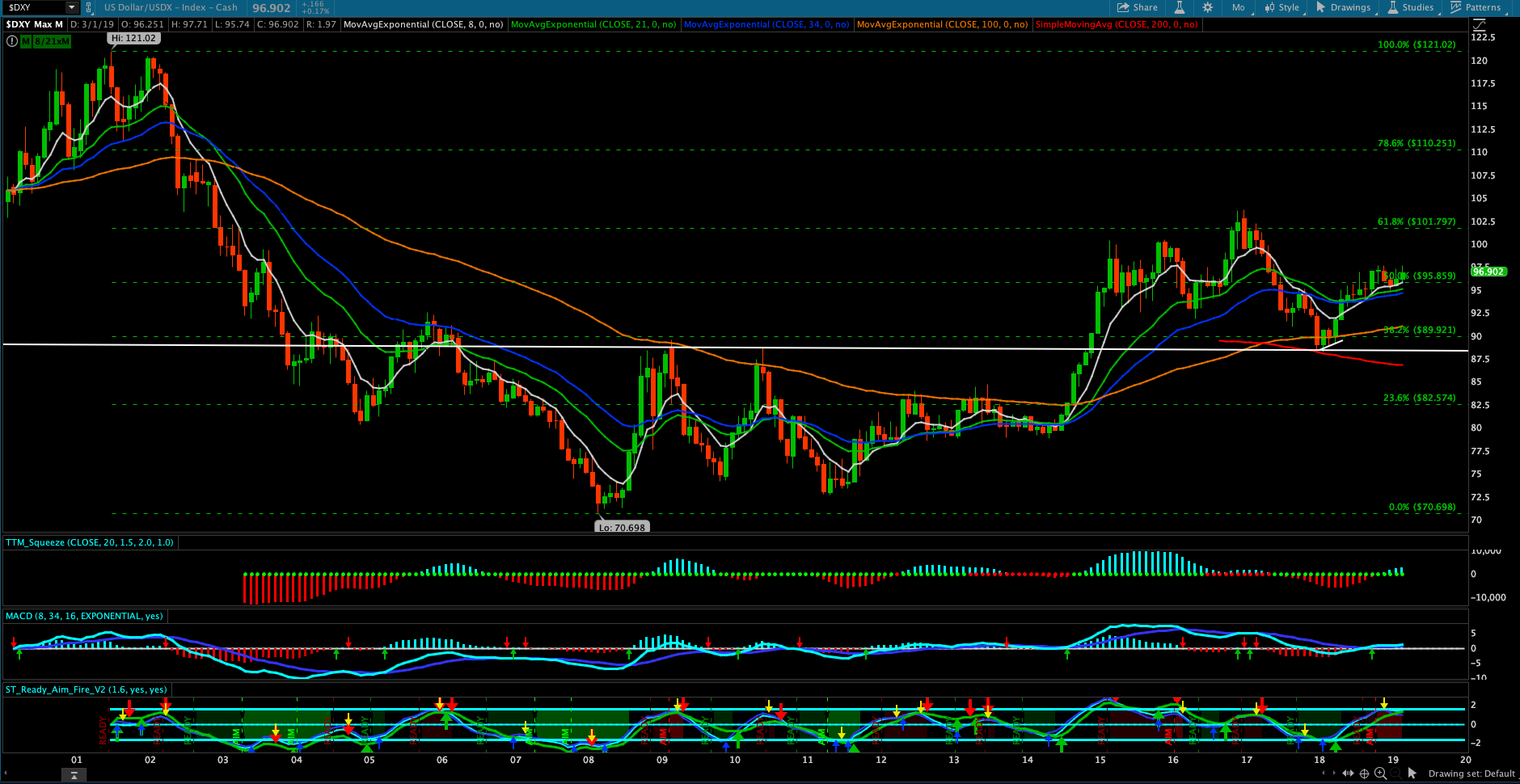 If we see bonds rally in earnest, expect the Dollar to catch a bid, and VIX to move up quickly.

Lastly, to this narrative of major market movers and risk, is China. China and trade talks have been part of the news cycle for longer than many of us care to remember now, however, that is only part of the story.

The big story around China, in my opinion, is not a trade deal but, rather, their credit and banking system. China learned from the United States how to inflate large credit and housing bubbles, but unlike the U.S., China has been able to centrally manage this inflation, for now.

I am looking at China for clues on momentum, this can be done by looking at the Shanghai Composite or, more simply, FXI the Chinese big-cap ETF.

China, very much like the U.S., has the choice of injecting more and more liquidity in to a saturated credit system or not injecting new credit and risking a cascade of defaults.

For now, they are choosing credit injection. This helped propel the world markets higher as China was printing while Powell was talking rate expectations down.

The question is… will it work? We don’t know the answer, but we know where to look for clues on whether the market believes the Fed and China or not.

We can remain focused on bonds, and with the inverted yield curve narrative en vogue currently, it will be easy to. We can also focus on the Dollar index, VIX, and Chinese markets for clues as to the direction of our markets.

Bonds, Dollar, and VIX imply fear and Chinese markets are a proxy for momentum… if we see fear assets spike and momentum assets roll, that will be a powerful signal that the rally may be losing steam.

As always, we want to remain focused on the technicals and our trading rules, but understanding the connections between these four assets will help us stay on the right side of the trend.

1 thought on “The Bond Market vs. The Fed and China”