How to Trade Around Unexpected Market News

When the FED or the government makes an announcement, the markets are likely to react. Whenever there is unexpected news, many new intraday traders can find themselves in the red. Especially after volatility takes over the markets because of unexpected news.

On April 22nd, 2021, that’s exactly what happened, we found ourselves in the midst of unexpected news with President Joe Biden’s tax proposal. The President planned to raise taxes on the wealthy. And when you hear news like that, traders need to be prepared for the moves that could affect their positions.

How to Trade the News

Now more than ever in this market environment traders are waiting with bated breath on anything that could change the course of this market. We have seen FED members talk about interest rate hikes and inflation, we have seen countries going to war, and all of this news has driven market prices both higher and lower affecting not only individual sectors but also the entire market itself.

As a trader, our job is to keep emotion out of our trades and only look at the technicals. This can feel like an impossible task when news can come out of nowhere to whipsaw the price around, but with volatility comes the opportunity for some really great trades. And volatility loves to occur around unexpected news. Traders can find themselves lost at sea in this situation, but if you have that understanding you can soon find yourselves to be a true master of the oceans.

Almost immediately after Biden released his proposal to tax the wealthy at a higher rate, we had a strong selloff. As many big hedge funds and industrial traders find themselves in this wealthier category, we expected the market not to react too kindly to the news. For those watching the intraday charts, there was a strong selloff, but the selloff fell right into support levels.

The most important thing to note around volatile news like this is to always stay cautious when you are trading. Be extra wary not to get caught in the selloff. Sometimes these announcements can cause knee-jerk reactions in the market down to support levels, where the price holds and then bounces. We have also seen this in the case where positive news comes out, the price immediately spikes, but only right into resistance levels. While this news, in particular, may have less of a possibility to bounce, it is possible the market could chop around support. If the chop has a wide enough range, this can make room for some great intraday trades.

If you hold longer-term trades and it isn’t an intraday trade, don’t trade solely off the news and get caught up in what the shorter-term move will be. It could end up making a great intraday trade, but don’t get emotional if you have time on the trade, or if it isn’t expiring. Oftentimes, the move reverses within the next few market days.

It may be easy to get caught up in the news and let that emotion drive you into or out of a trade, but this can be a very dangerous game in your trading. Psychology is one of the most important factors of trading, and it’s important to remember this when trading around unprecedented news. FOMO either on closing out of a trade that appears to be “dying” or forcing yourself to open trade so you “don’t miss out” on all the profits can be a dangerous way to trade. With these types of moves, it is easy to go into the dark side of trading and let your emotions guide you. Make sure if you are trading off the volatility surrounding the news, you do so with the technicals still in mind and make an objective decision based on what you are seeing on the charts.

Risk what you are willing to lose

It is unexpected news like this that reminds me why I am so mindful of capital risk on every trade I take. Especially around FED and unplanned news, the intraday trades you make should be treated like earnings announcements – meaning it’s 100% a lotto trade. By risking only what you are comfortable losing, you eliminate the emotional side and are able to play the moves around the news more strategically. I am glad we were able to close out several of our trades for profits or break-even prior to the news release, so we were able to recoup some of our capital and protect some winning trades.

Be Mindful of your Technicals

Let’s see if this was a knee-jerk reaction or if it caused a bit more of a sell-off. One thing you should note is if you were trying to intraday trade this move lower but were caught on the wrong side when support held, there was a clue that a bounce back up might occur. The technicals started to show a bullish divergent bar, and if we closed below the 30-period simple moving average making this, then there was a good chance for a reversal.

Especially now that we are pairing it with a pullback on the compound breakout tool. If it breaks the 30 period SMA before the end of the day, I would play it between 4,150 and 4,143. I try to use spreads to keep risk in mind when there’s news like this. Keep in mind it could always pop back up before the close of the hour. SPX was trying to hold 4150. If the SPX moved below 4158 or 4159, I think there could easily be a retest down to 4150 or maybe 4140 if we break this level down to the ATR trailing stop.

On the smaller time frames, watch the resistance levels to see how they hold. It looked like we were holding 4150 and bounced back up to the 30 periods SMA and were maintaining that level, making it seem like a knee-jerk reaction in the news. It looked like the news would pause there and digest. If it holds 4160, I don’t think that heavy news would bring it all the way up, but we could definitely see some chop. 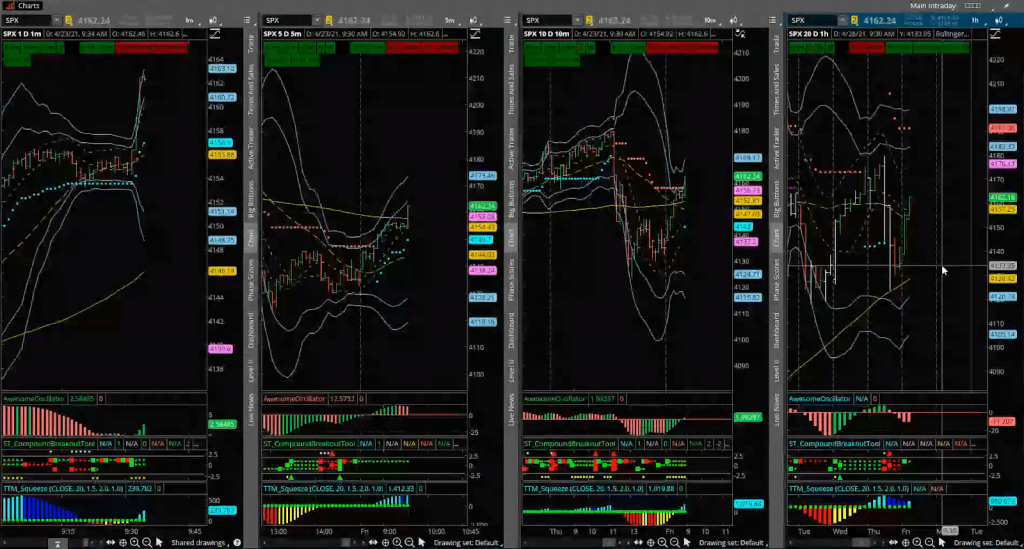 Notice that we went right to the ATR trailing stop and held support beautifully, and held back up. SPX was trying to keep up 4150 and was still shy of 4160, but overall if you are seeing a whiplash move like this, this is when your technicals help you out at where it may pause or the levels it might trade into.

We paused on the 60-min chart at the 100 periods SMA, and sometimes even moves that appear to be emotional still paused at our technicals. We made a bullish divergent bar with back-to-back divergent bars, showing a sign of consolidation. It took the fourth bar to take the higher high, so you would have to hold this trade until the next day if you wanted to take it back up.

The news brought us right back down to a support level around the 10 periods simple on the daily chart. We bounced back up the next day and traded within that choppy sideways action between 4180 and 4125. This chop allows things to reset. There were signs of consolidation with choppy momentum, the choppy compound breakout tool, and Bollinger bands coming together. Overall the price was holding the 10 period SMA as support, which is a good sign that ultimately as long as we can hold that level we’ll test that 4200 and if we break above it, we’ll continue that bullish trend. 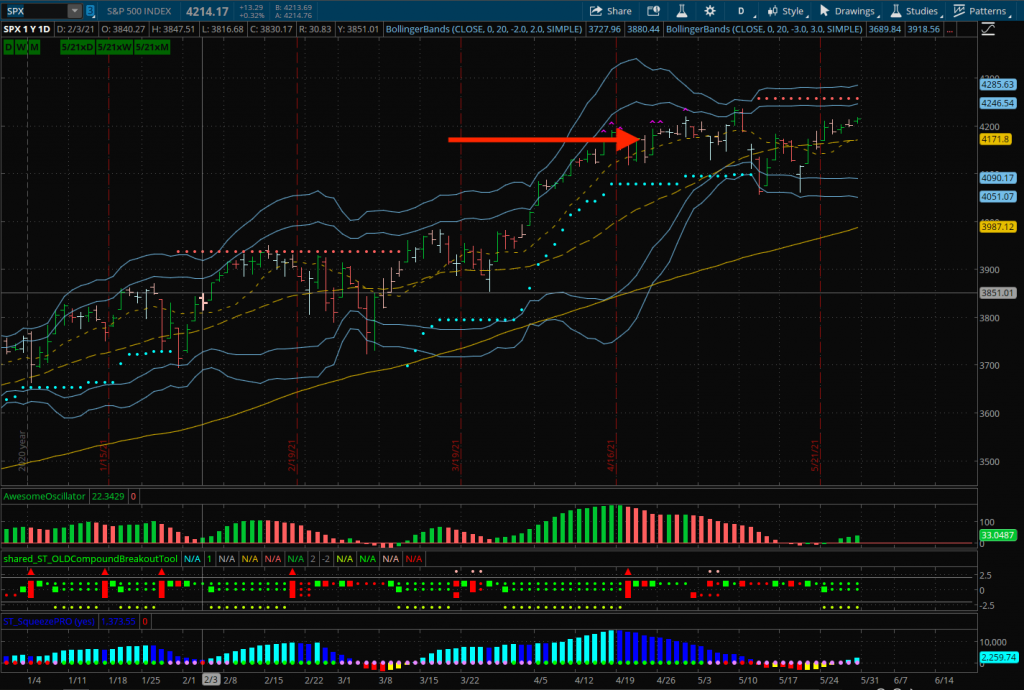 As you can see, all those levels were hit that day. We went right into the support levels I was mentioning when the news broke out. When you get strong sell-offs like this on the intraday charts, be mindful of the psychological levels. The 50s or double 0’s are psychological areas where we could have more pauses, when buyers come in they find it as a good buying opportunity. Had you been emotional, you would have sold off emotionally and would’ve missed the bounce back up and been stuck with a loss rather than holding onto the trade.

Keep True to your Trade Discipline

Once again, match your position with the technicals and make sure you keep risk small and only risk what you are 100% willing to lose. When the news drops like this, volatility will spike and you will have to pay more for those options. As soon as the market digests the news, typically that volatility (and in turn the premium on options) will drop back off, especially if it is near-term expiration. Always be cautious with how that works.

All in all, don’t get knee-jerked by the markets. Be extra cautious around unprecedented news if you are intraday trading. If you have long-term positions and are able to, try to hold onto another day, so you avoid getting knee-jerked by the move and stop yourself from trading emotionally rather than what the technicals are telling you. As always my fellow traders, may the trade be with you!

Does your trading strategy need refining? Or are you looking for guidance and mentorship? At Simpler Trading, we can offer both. Join Allison Ostrander in her Profit Recycling Mastery class and get monthly live-trading sessions. 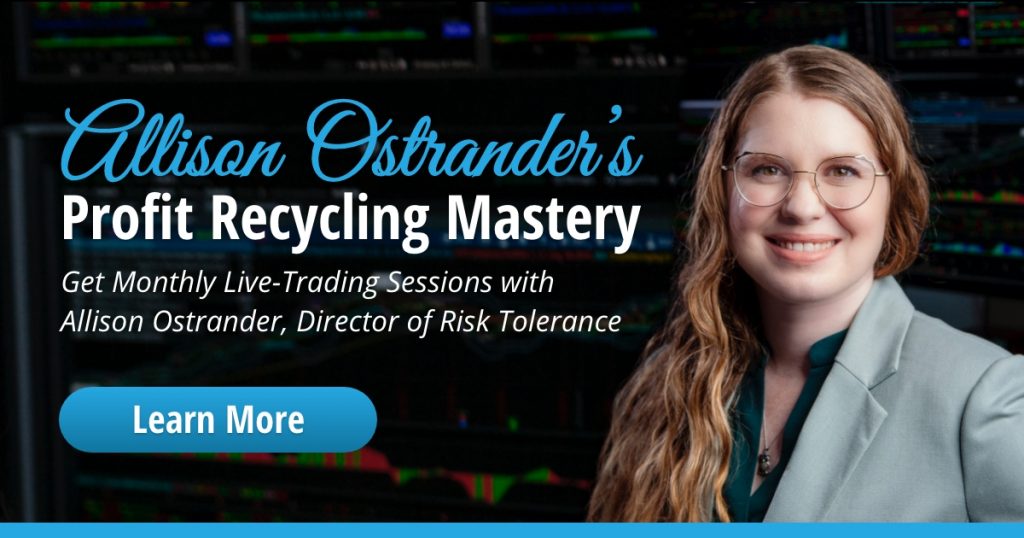