How to Trade Around FED News

I often get asked by traders how they should trade around the FED announcement. What are the moves they should be aware of and how it could affect their trades. This is what I like to keep in mind and share with others:

1. As with any trade, only risk 100% what you are willing to lose. This should be a given on any trade you put on, but it is especially true if you are intraday around the announcement. Taking a trade around FED news when you are trying to anticipate a certain direction should be treated like a trade you hold through an earnings announcement. This means it’s 100% a lotto trade. There have been plenty of times that the market and news predict what the FED will do and say and then just the slightest language change in the FED’s address can make the markets move drastically. By risking only 100% what you are willing to lose allows you to play the news without getting emotional about how much money you have at risk.

2. Typically the general market will chop in a defined range going into the news. Sometimes this can be a volatile wide range, other times it can be a narrow flat range. What I like to do is just watch the market within the 30 minutes to first hour of trading and see if it hasn’t started to define what the highs and lows of that range could be. Notice for today prior to the Fed News, SPX traded in a roughly 10 point range between 3940 -3950. 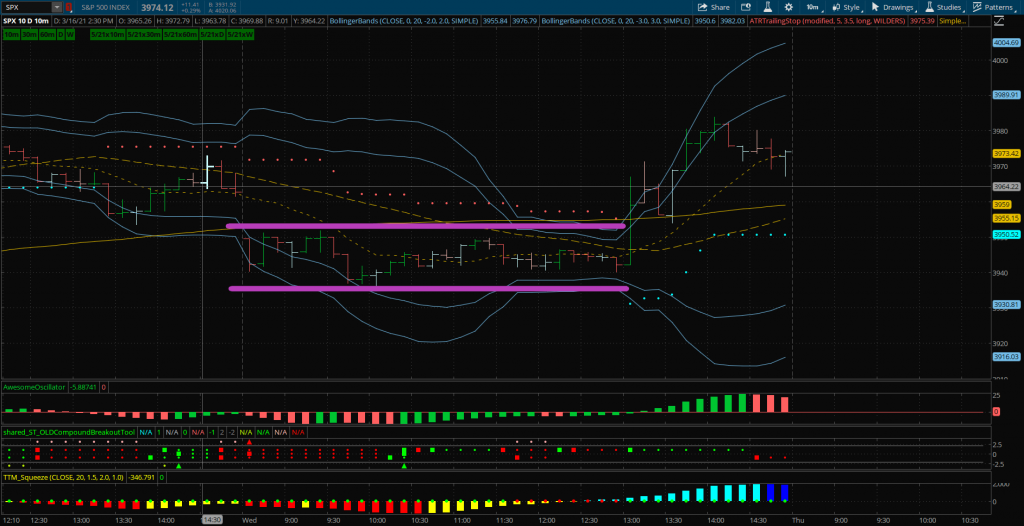 If the chop is of a wide enough range, this can make for some great intraday trades before the FED meeting. Just playing from the low to the high of the range, and if you wanted to, also the high back down to the low again. However, I would look to close or cover my risk using the profit recycling strategy before the news because of point 3.

3. BEWARE OF THETA DECAY. If you are trading same day or same week expirations around the fed news (like SPX having Wednesday and Friday expirations) be careful of how theta decay works on days like these. Due to the uncertainty of the market move around the announcement, oftentimes options will hold onto their overall value longer and will not experience much theta decay before the announcement. Once that announcement occurs then those options that were holding onto higher premium, or strikes that were out of the money will see that theta decay slips out quickly. This is a part of the reason why you should be mindful of risk if you play through the announcement because if the move goes against you, short term and same day trades can go to zero very quickly.

4. There will almost always be a dramatic move in the market right after the FED news. Sometimes this is in a bullish move to the upside, other times it is a pullback lower. No matter what the news is, the market will react, and in some cases it can happen in both directions in just a few minutes. I have encountered times in the past where the market will sell off on the news as it is released. The market then digests the news and then people buy back in, bringing the price back up. If you take an intraday trade to hold through the news, you may be able to take a quick profit off this move, but be aware that theta is also starting to kick in more quickly now that the news has occurred.

5. After the dramatice move, two different things might happen. The first is the more obvious move, which is that the market continues to trade in the same direction it made with the initial reaction to the dramatic move. Today, for example, the price in SPX gapped up, held support levels and then continued with an overall bullish sentiment higher before pulling back a bit to test intraday support at the close. 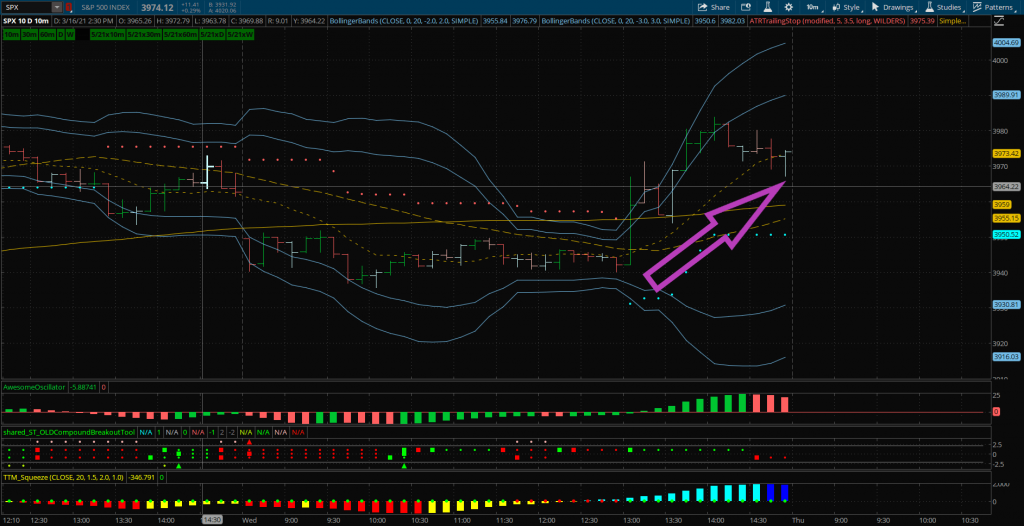 The other move that happens after the initial dramatic move off the news is the market ends up settling back into the same range that it was trading prior to the announcement. This isn’t an uncommon occurrence. If the news the market was expecting to hear from the FED was in line with their announcement, then sometimes this has already been priced into the market. This is why it will sometimes revert back to that choppy sideways range after the news occurs. If you think this is what is going to happen around the announcement, and you want to put on a lotto trade, one option strategy to consider is an Iron Fly. This trade benefits from theta decay, so putting it on prior to the news gives you all that extra built in premium on the options. Then, after the news (if the market remains flat by your short strike) you see that theta decay works in your favor and you are able to close it for a profit. Keep in mind this would be a shorter dated, potentially even same day expiration (if a symbol like SPX) where you can really benefit from the theta decay quickly. Also keep in mind it is still a LOTTO trade, so only risk 100% what you are willing to lose if the market decides to go into a trend after the announcement, like it did today.

As always, if you are mindful of your capital and a few of the notes listed above, then FED days are just another market day to trade through. If you are ever nervous about trading through an announcement, then you can always stay more in cash, or have your trades further out in time to be able to trade through the potential short term reaction to the FED announcement.

As always my fellow traders (and Star Wars fans), may the trade be with you!