Day trading has become a popular type of trading and definitely has its advantages. A pattern day trader (PDT) is a regulatory designation for someone who executes at least four trades a day, over five days, from the same account, and follows the pattern day trader – or PDT – rule. I have a strategy I use to get around that rule, and I want to share it with you!

Most retail traders like to take what are called swing trades. These are trades taken off typically a Daily, Weekly and/or Monthly Chart where the trader intends to hold it for multiple days while ideally obtaining a profit. A lot of traders will base their trades off the technicals they see on the Daily time frame or higher.

However, in day trading, you can take your chart technicals and instead of placing a swing trade, you can actually take that chart signal and intraday trade the setup instead. This means you can take signals off of the smaller time frames, and you can take a trade solely based on the intraday move. Some intraday traders like to take signals off the 5-minute or the 10-minute chart, and others will look to the 30 & hourly chart. I personally like to use a combination of all those time frames to look for particular setups.

A lot of traders enjoy being pattern day traders. One reason traders like it is because you are in and out with your capital within the same day, so you don’t necessarily have to hold on to capital risk overnight. Another reason people like pattern day trading is because especially during morning session hours or into the close, you can give yourself a specific time, a few hours a day to devote to day trading. Then, after those few hours are done, you are free the rest of the day. Many PDTs like the simplicity of it — you don’t have to be available the whole market day to be able to make the profits or find the setup you are looking for. Instead, you can see if a setup is valid, try to get into it, and then just as quickly you are out and you are moving on with whatever else you want to do that day. The only problem with pattern day trading is that there are rules around it.

What is the PDT rule?

Day trading is generally considered a riskier form of trading, simply because it is done on a smaller time frame and is intended to be a faster pace of getting in and out of a trade. The general idea in day trading is that you are trying to take profits as quickly as possible in the smallest amount of time possible. Because it is considered to be so risky, there are strict rules surrounding how you can day trade. For most traders to be able to take advantage of day trading, they are required to have at least $25k in their account. This is the pattern day trader rule. (For this post I will be focusing on Margin Accounts, which is the type of account that a lot of options traders use)

The way the PDT rule works is, if you have over $25k in your account, then you are not limited to the number of day trades that you can do. This is because you are considered to have enough capital in your account to be able to take on what the brokerage platform considers as this riskier form of trading. However, if you are like me and trade smaller accounts, then you do have limitations to how you can day trade. I came across this the hard way.

At the start of my trading journey, I helped manage quite a few of my family accounts. The family members who’s accounts I managed were older and had saved up more money in 401ks and other areas throughout their life, so I was managing quite large sized accounts. These accounts ranged from over 7-figure accounts to small accounts, like I focus on now. Since I first started trading using accounts well above $25k, I had never been limited to these day trading rules. Before long, however, I began to switch gears, trading some smaller accounts for some members of my family. One of these accounts was below $25k when I first began trading it. Rather quickly, I realized that I was limited to how many day trades I could do.

The PDT rule limits traders with accounts under $25k to three day trades for a rolling 5-day period. Don’t be confused: it is specifically three trades per 5 day period and not three trades per week. For example, if you put on a day trade on a Thursday, the following Monday does not reset your day trading limit. The one day trade that you did on Thursday lasts all the way until the next Thursday before it is cleared off of your account. This means that for the TOTAL of a seven day time period (from Thursday to Thursday) if you do over three day trades, you will be flagged as a pattern day trader. This happens whether those trades were three within the same day or three trades spread out between three different days. When you are flagged as a pattern day trader, they put a hold on your account where you can only close out of current trades. You cannot open any new ones. Then, you have to get your account up above $25k by either closing out trades or adding money into your account. If you don’t do that, your account will remain on hold and they will not allow you to open any more new trades, only close existing ones, for a 90 day period.

Loopholes to the Equity Margin Rules

I have run into this issue twice before the hard way — both early in my career and actually not too long ago with my Tastyworks account. Through both of these experiences, I’ve discovered a few loopholes to the rule.

If you do accidentally trade more than three trades in the seven day time period and your account is frozen, there is one thing you can do if it is your first time having your account frozen due to this rule. This loophole is that you actually have one freebie. You may call in and say you need them to unhold your 90 days and ask them to allow you to trade again. If it’s your first time ever hitting this rule on the account, they will take your account off of hold. The catch is that within the 90 days from the time that your account got flagged, if you accidentally get flagged again, they will put a hold on your account and you will not have another freebie. Which means you will have to wait the full 90 days. While this is helpful in an emergency situation, it is not the ideal loophole for the PDT rule. It is also a loophole that is in talks around some of the brokerage platforms potentially stopping, meaning no more freebie. If you want to check up on whether or not your brokerage platform has this rule, feel free to give them a call. You don’t want to hurt yourself by learning the answer the hard way.

The best loophole for the PDT rule that I have found is the Profit Recycling Strategy. Profit Recycling is how I avoid the pesky rules in my small accounts but still get to take advantage of the intraday moves. I want to take advantage of these moves because, for those of you who saw the selloff last year, sometimes moves can happen quickly in the market and those moves can be the best time to do intraday style trades. With these trades, you are in and covered on the trade within the same trading day, you protect your capital, you lock in a profit, and you can really take advantage of that volatility.

I’m still able to take advantage of these intraday setups by using the Profit Recycling Strategy. By using the Profit Recycling Strategy, I am able to still take trades off of these moves, but rather than closing the trade within the same day, I profit recycle it, locking in an overall profit and creating a credit on what is naturally a net debit spread.

So, instead of being in it for a couple of days, I am covering my capital risk literally within the same day, trying to lock in that profit and more importantly, no matter what, reducing my capital risk before the next day trading session.

If you are interested in learning more about my Profit Recycling Strategy and how to use it, you can learn more in my Profit Recycling Class. It is a six hour course that goes over everything you need to know about Profit Recycling. It also includes a bonus class on the option chain and an e-learning module where you can test your knowledge on the material for both classes. By the end, you’ll be set up to outsmart the pattern day trading rule through profit recycling just like me.

This is my favorite loophole for the PDT rule, and the best way I avoid the day trading rules. Instead of opening and closing the same option strike which would count as a day trade, I am using the option chain to my advantage and protecting my capital before the market close that day. That is the strategy I like to use to keep my capital risk off the table, lock in profits, and then have a fun bonus lotto trade that I can try to get a little extra profit on either the next day or later in the week, or if it’s SPX it can even be a cash settle. 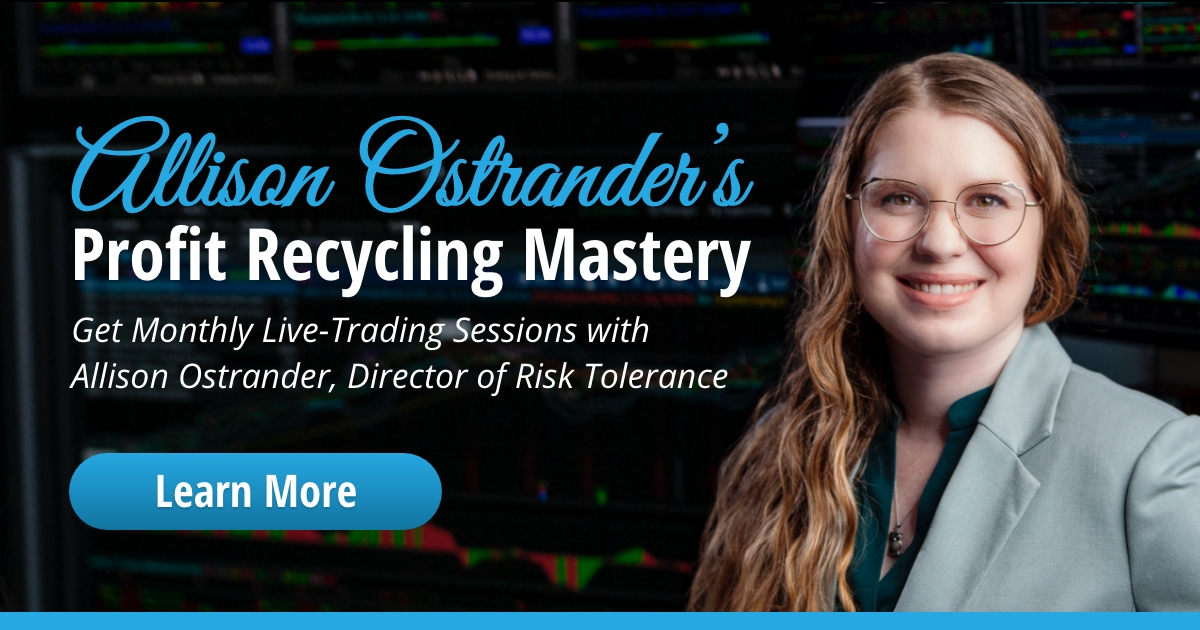 Q: Why is there a pattern day trader rule?

A: The Pattern Day Trading rule was created as a safety rule to limit the risk associated with day trading.

Q: How many times can you pattern day trade?

A: The PDT rule limits traders with accounts under $25k to three day trades over a 5-day rolling period.

Q: What happens if you violate pattern day trader rule?

A: “If you do accidentally trade more than 3 trades in the 5-day time period your account can be frozen.”