Where is this market headed?

Where is the market headed from here? This is a question traders often ask themselves, but it has been especially true in our current market.

Outside the markets, our economy is teetering in weird limbo. With stay at home orders around the world, the US has been faced with the highest unemployment that has occurred in our country’s history. Many companies were shut down as others learned how to work from home to stay on track. Even relief checks sent out and business loans have not been enough for some to catch up on bills or keep our small businesses opened. There is now also a question of what commercial real estate will look like from here as many companies look to work from home for the remainder of the year. This does not include the recent civil unrest that has been bubbling under the surface for decades, and our country is now confronting. Though the Fed’s and other countries have done what they can to help curve and reverse this economic stall, the question remains: will it be enough, and how fast of a recovery can we expect? During our last recession it took years for the market to get back up to its prior highs and continue in its bullish trend.

On the other hand, the market has made some interesting moves since Spring. The OPEC situation in March sparked the match for a strong downturn and the coronavirus was kindling for the fire that brought the most volatile pullback and monthly range the market has ever seen. Strong monthly support levels were broken and everything was pointing to a continuation lower.

However, if you went short in March and held, you are probably upset at the red your account is currently showing. Instead of continuing the selloff, which has had such a strong downturn in such a short amount of time, the market has made a strong bounce back up. This may not be true for every stock or sector, like the travel industry or retail companies like Macy’s, but the majority of symbols have seen strong bounces, some already exceeding the highs they made prior to March. 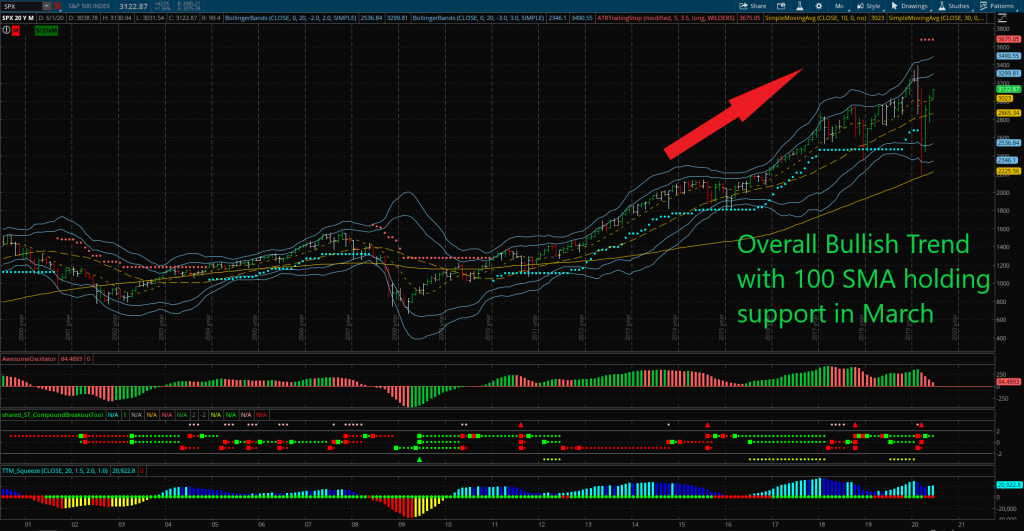 As SPX breaks and holds above 3000, many traders are flabbergasted wondering how to trade their accounts. This is why I always mention to traders to be mindful of risk, and how much of your overall account you are investing, and in single trade ideas. If you were fully loaded on the bearish side and got your head ripped off from the bounce, your account is hurting and your emotions have probably lead to the Dark Side of Trading

Emotions can easily kill an account, and in uncertain times like this, it is even more important to keep a cool and collected head. Being mindful of your Risk is one of the ways you can help control the Dark Side of Trading. Another way to stay out of the Dark Side of Trading is to follow the technicals on your charts. It is easy to listen to the news to try to decipher and decode where the market is going, but doing this can be like a fortune cookie, vague and oftentimes unhelpful. If you were following along with technicals during this market downturn and bounce, then you would have been able to find great setups to take, even when the news may be telling you something else.

So many are probably asking what the market is going to do from here, today? This is what my technicals are currently showing me:

Currently SPX is holding above 3000 and has broken the 100 Simple Moving Average on the daily chart, turning it from resistance into support. 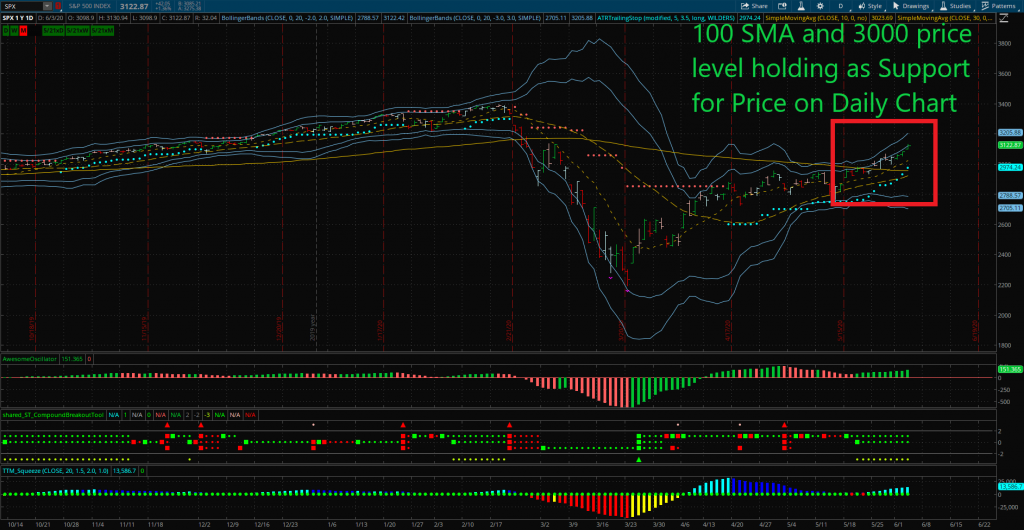 This is a bullish sign that SPX is trying to move higher. If it can continue to hold support, which looks strong as of the gap up at open and break above 3100 today, then I would look for an overall move higher. The next resistance level to go up and test is a Weekly Resistance level at 3244, close to 3250 psychological level. 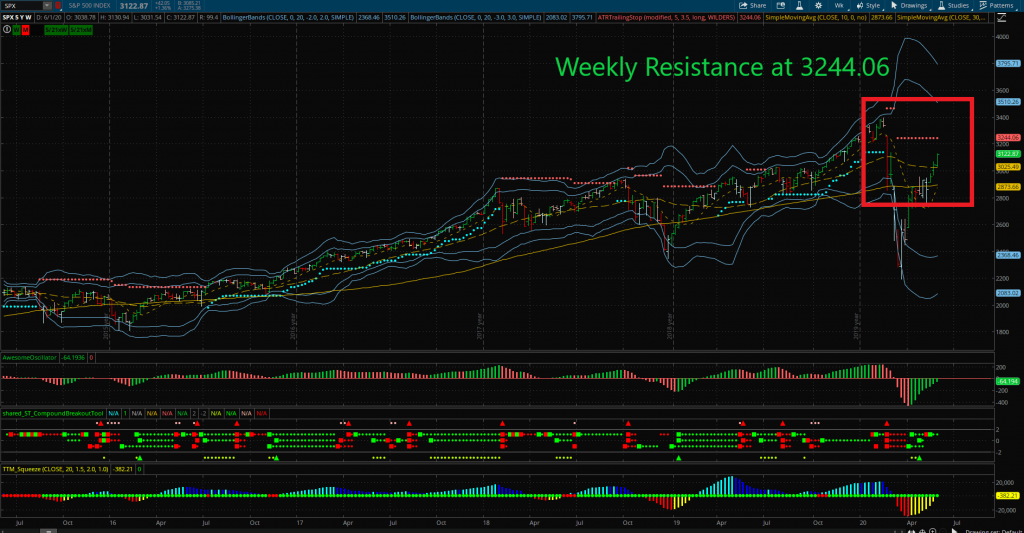 The Monthly Chart ultimately still remains in an overall Bullish Trend even with the downturn that we saw in March. This would tell me to continue to look for moves higher eventually above the prior highs. However, there are still a few things I am cautious about from a technical standpoint (let alone the current economic and unrest our country is currently in). The first thing I am cautious about on the SPX Monthly time frame is we did break the ATR Trailing Stop in March and turned it into resistance from support. This usually is a bearish sign and the only times we have seen this occur in the last 20 years was in the late 1990s into the early 2000s with the Dot Com bubble, and in 2008 from the Housing Crisis and Recession. Perhaps the bearish market we saw those two times coincides with just the very strong and volatile pullback that occurred in March alone. As I mentioned, it is the strongest Monthly Range we have seen in a month ever occur on SPX. However, my caution comes in what immediately followed the break back in the early 2000s and 2008. Following the ATR Trailing Stop breaking, we saw at least a few months of consolidation. In 2008, it only lasted for several months before the bear trend continued. In the early 2000s, the consolidation lasted close to 8 months before the market started to tumble in the trend. From our recent break in this technical, we have only in our 3rd month since the break of support. This gives me a moment of pause to consider how I want to trade my account. Another thing currently appearing is a high Put/Call Ratio, which oftentimes leads to a move lower. Will it be a strong move to the downside, or just a reversal to test support? Right now it is hard to tell, but it is still a valid signal hinting to a downward move. 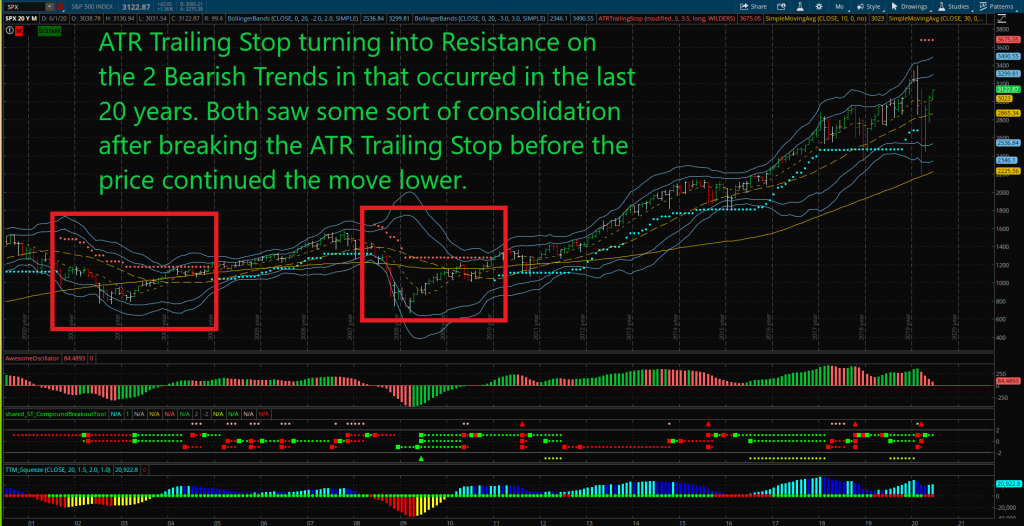 Taking all these technicals into consideration, I don’t plan to fight the overall Bullish Signals, but I want to be mindful of a potential pullback. The best way I can trade this market is to find charts on individual stocks, symbols, and ETFs that are showing potential for Bullish Setups on their technicals. However, to be mindful of the potential pullback, I will also look to place a hedge or two in my account with a low Risk high Reward scenario. I would place these hedge trades in the broader market like SPX in case it does start to drop. This is a great way to protect my account with the majority of bullish trades I hold while having insurance in place for a move lower. By keeping in mind my overall Risk on all the trades I enter, I know that I will not blow out my account and can also continue to trade this current market while growing my account. Also, keeping in mind my Risk will keep my emotions in Check not leading me to the emotional, Dark Side of Trading where traders tend to lose money.

As always, May the Trade be with you!