When the Market Gives You Lemons

When the market gives you lemons, stop trading and start swiping.

As we are all very aware of, there are times when the overall market is in chop, pulling back, or trending down. Each trader has different tactics to deal with these times such as going short, hedging, selling spreads, or just going to cash. What we are waiting for is the market to get back into an upward trend, and what we are all REALLY waiting for is when to buy in on the next round of explosive stocks.

So during the times the market isn’t conducive for long trend moves, what can we do to be productive and prepare ourselves for when things do get better? Now that the big correction at the end of 2018 has passed, we have many great examples of what it is we are looking for from individual tickers when the market isn’t doing well.
To give a visual of what it means to go hunting for stocks that don’t care about a market decline or tickers that hold up well during that time, I have laid out a chart view where a ticker is over the SPY and in sync with time.

In this first example with OKTA vs SPY, note that when the market initially broke support in October it was trending under the 50 DMA (magenta line) and so was OKTA. But OKTA was coming into support of its 200 DMA (orange line) whereas SPY was under its 200 DMA. Then when the market fell off a cliff in December, OKTA actually managed to go up and then hold neutral. This was an excellent sign that whenever the market found its bottom OKTA would have superior relative strength and be one of the stronger tickers to lead the next move up. 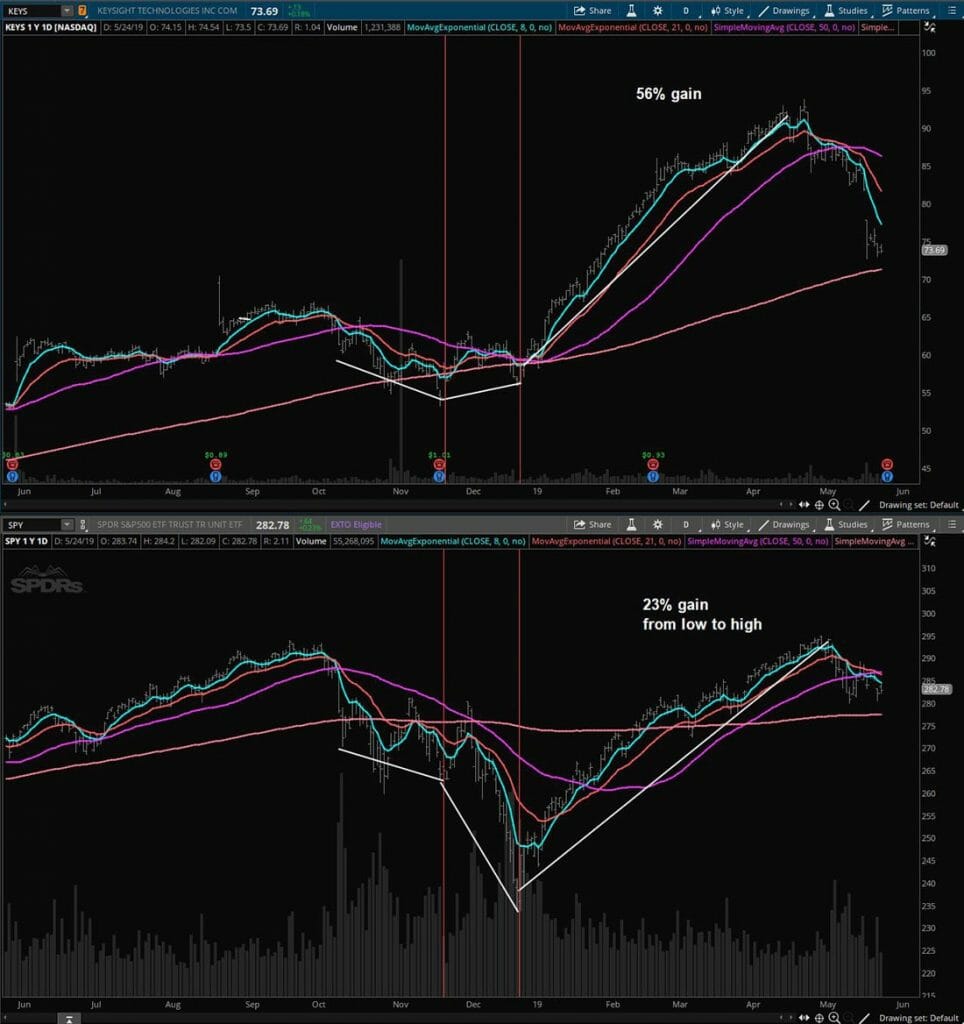 Next take a look at KEYS vs SPY. It too came into support of its 200 DMA after breaking its 50 DMA. Note how well it held up during the market’s worst moments in December. KEYS was in the most ideal location to take advantage of a supportive market since it was positioned at it’s daily 50 and 200 MA. As you can see this doesn’t mean that a stock will be impervious to each market correction if it was able to weather one well. So we still need to have our exit rules in place and for me that is typically the daily 50 MA. 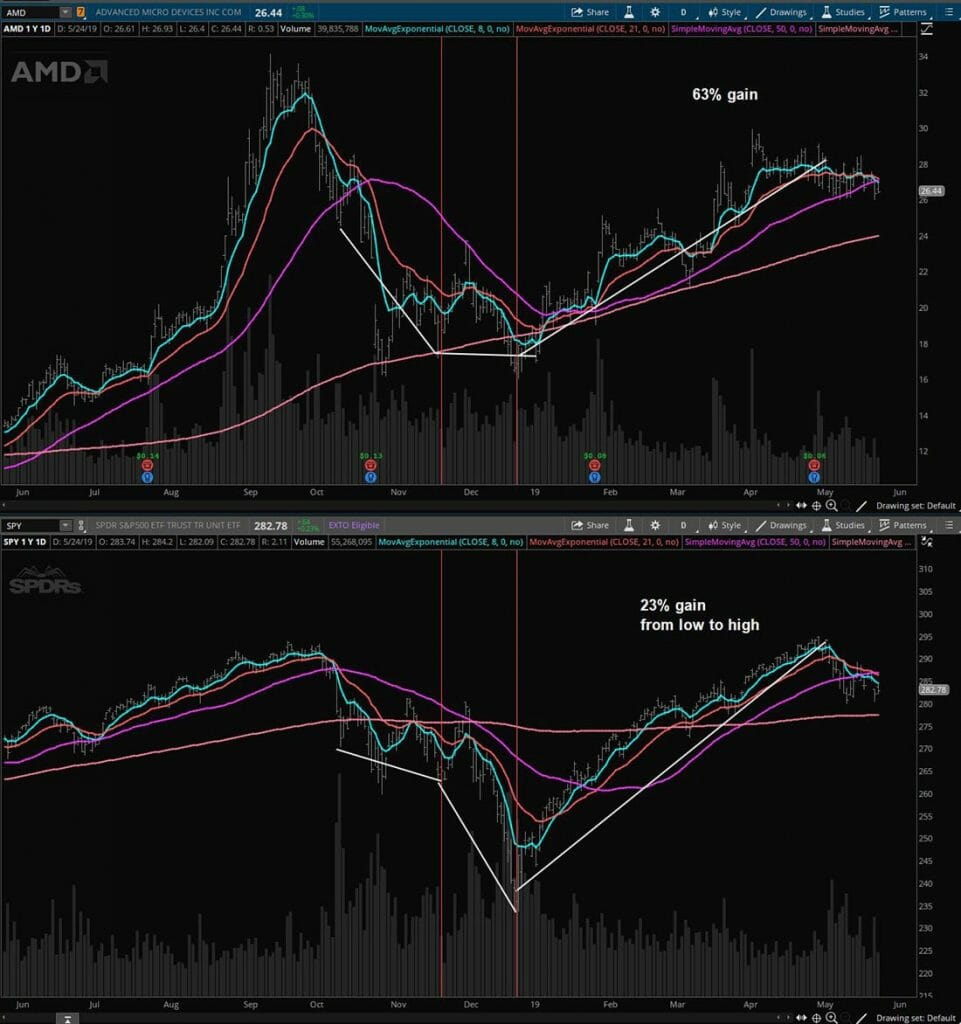 AMD suffered significantly at the beginning of the market down turn, but it was also sky high and was well off any major supporting moving average supports so I will give it a pass for that portion. But if you look at the latter part of the SPY decline, where the drop was most significant in December, you will note that AMD was able to remain neutral and only temporarily dip below its 200 DMA. It then regained its 50 and 200 DMA very quickly to make a 63% gain from low to high. ** AMD seems to be holding up exceptionally well during this current market instability. 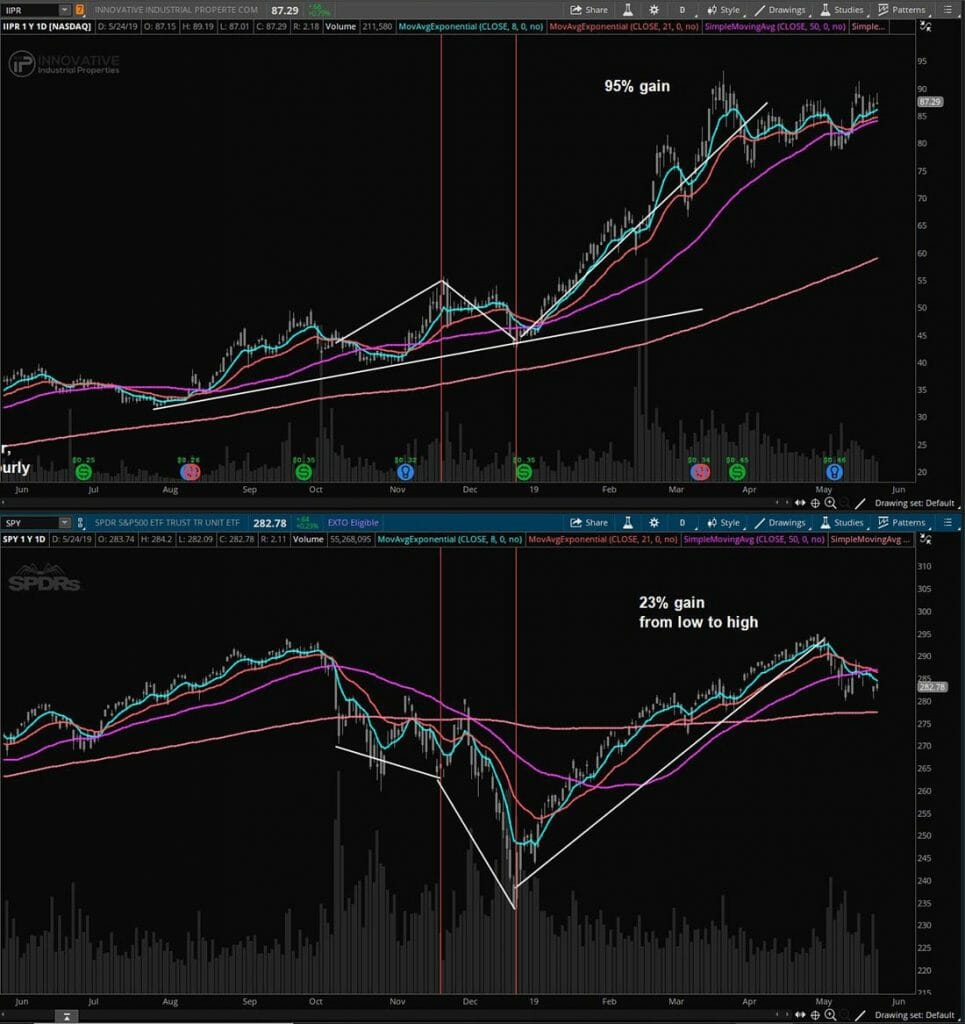 IIPR vs SPY. How’s that for maintaining strength during a market decline. I think you all are getting what I am trying to convey here and what’s amazing is that IIPR gained 95% when the SPY gained 23%.

Let’s do one more for fun: 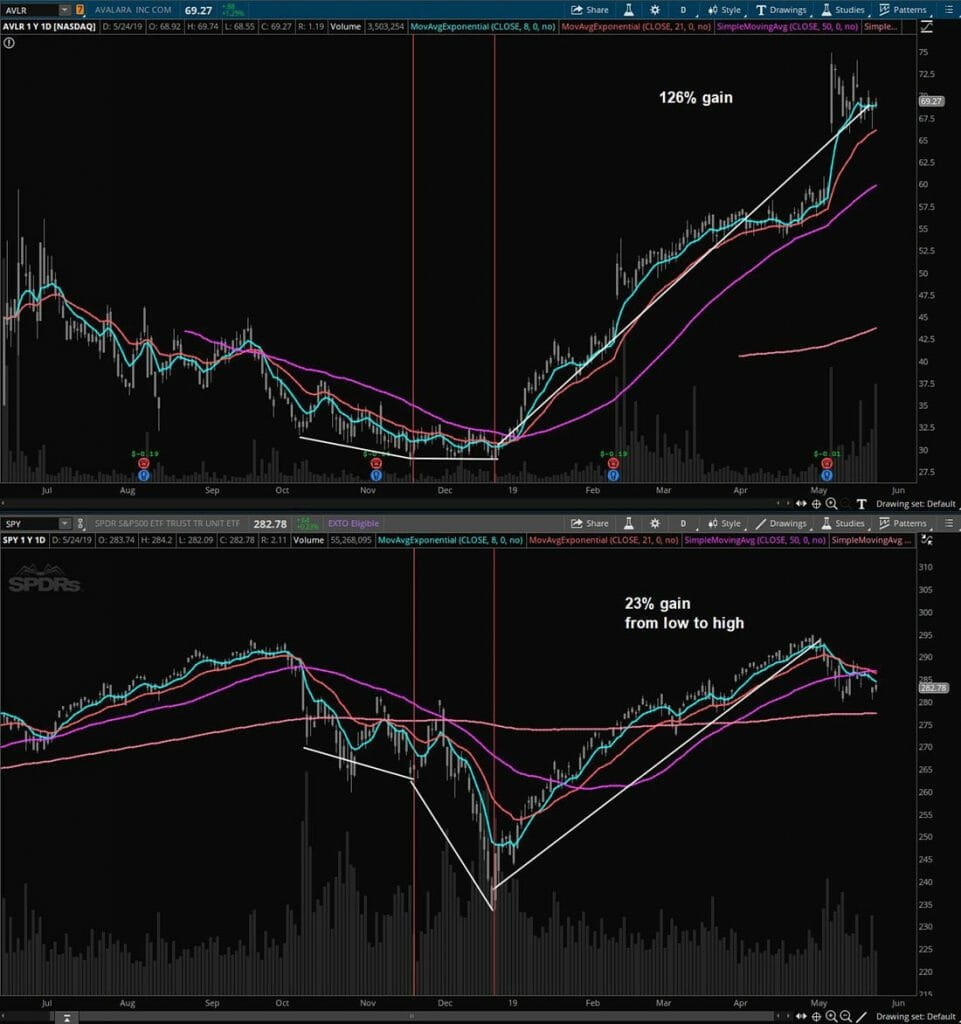 AVLR is a relatively new IPO and like most recent IPO’s, they seem to like to trend down after the initial excitement. That being said, when the market was doing its worst AVLR went completely flat and built a base. For my style of trading, it had a perfect setup when price managed to get above the 50 DMA with force and a supportive market. Add in a couple good earning reports and this beast grew 126%.
** note how well it is handling the current market instability.

So what can we do to feel productive when the market is giving us lemons? Consider resting your trigger finger and get your swiping finger some exercise. Start flipping through new tickers to see which of them either are either resting or don’t care that the market is throwing a fit. Because whenever the market says go, those individual tickers can do multiples of what the market can do.