I have gotten many questions about futures data recently and decided to take some time and explain some of the most important issues to consider when thinking about what data to plot. If you never imagined that there are choices to consider then look at this quick example using Coffee futures.

Let’s start by looking at a chart of the symbol $KC in ThinkOrSwim: 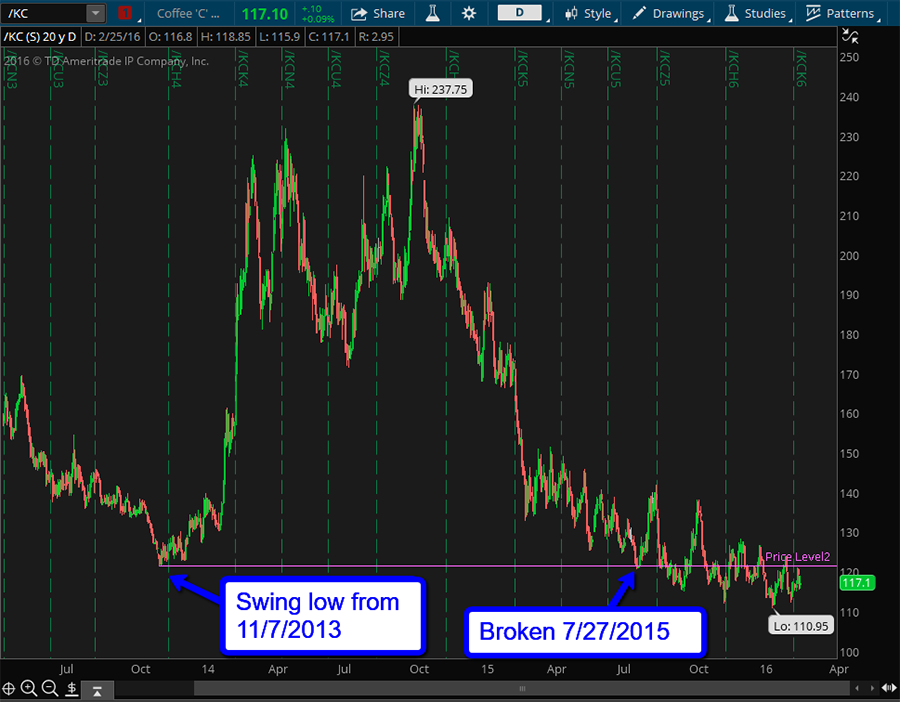 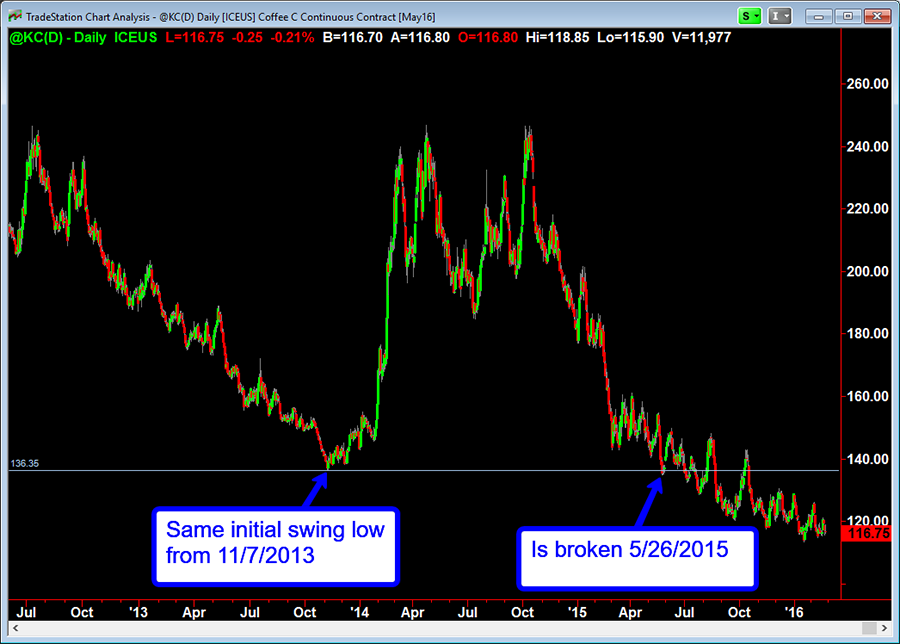 Here, too, we have an initial swing low, but it was broken on 5/26/2015, two months earlier than on the TOS chart. If you trade futures based on charts then you really need to understand the differences on these charts, why the swings were broken at different times and the number or variations which can broadly affect what you see on your charts. One thing to get out the way first is the difference isn’t just “/” in “/KC” on TOS versus the “@” in “@KC” on TradeStation. This is just a difference in the code used to reference a continuous chart of the same Coffee C product traded on The ICE exchange.

So if the two charts show different information while purporting to chart the same thing, then which one is correct? The reality is that both are right and both are wrong. Just as there are many different versions of fables such as The Goose That Laid The Golden Egg (each with minor differences) and nobody can assert which one is true or authentic, nobody can say which chart is the real chart of Coffee. Furthermore, just like the fables, both charts shown above are fiction. Really!

To think about the difference of this idea of truth versus fiction, let’s start by thinking about a the chart of a stock like IBM like this one here: 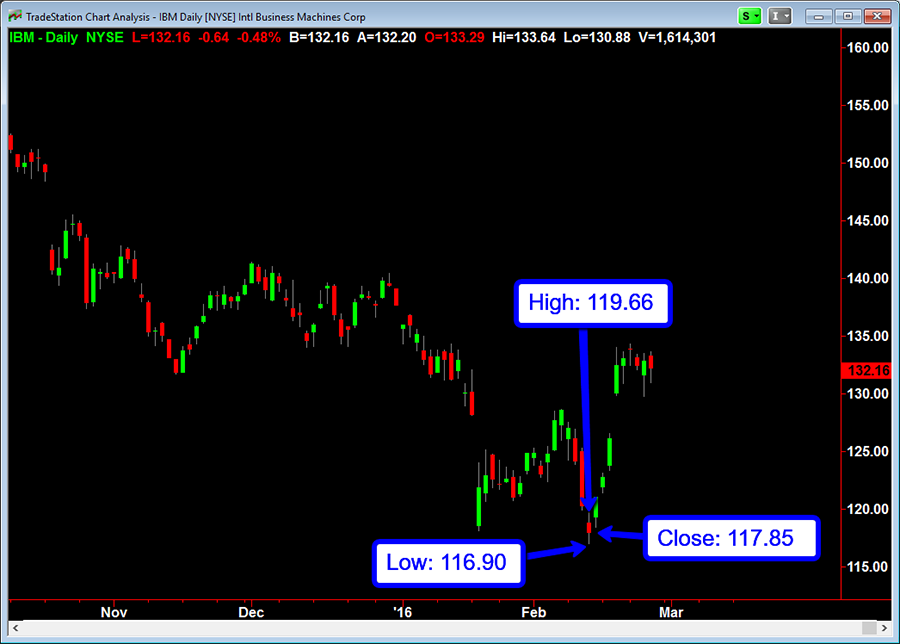 On 2/11/2016 IBM made a swing low. The candle for that day shows us certain things about trade on that day. The high of the top wick is at 119.66 telling us that shares changed hands at this price but none traded at higher prices. Likewise, the bottom wick ending at 116.90 informs us the lowest price where shares traded.

So long as these were the actual highs and lows traded on that day (and I believe them to be), then facts reported to us by the chart, like the high and low, are telling us true facts about what happened on 2/11/2016. Therefore, I’ll say that this chart represents a truth.

Let’s explore this concept with a Weekly chart of Crude Oil which had a dramatic sell-off in 2008 into 2009 and additional selling over the past year and half. If we reference the TradeStation continuous contract symbol, @CL, we’ll see a chart which has a swing low of 77.02 in February, 2009. 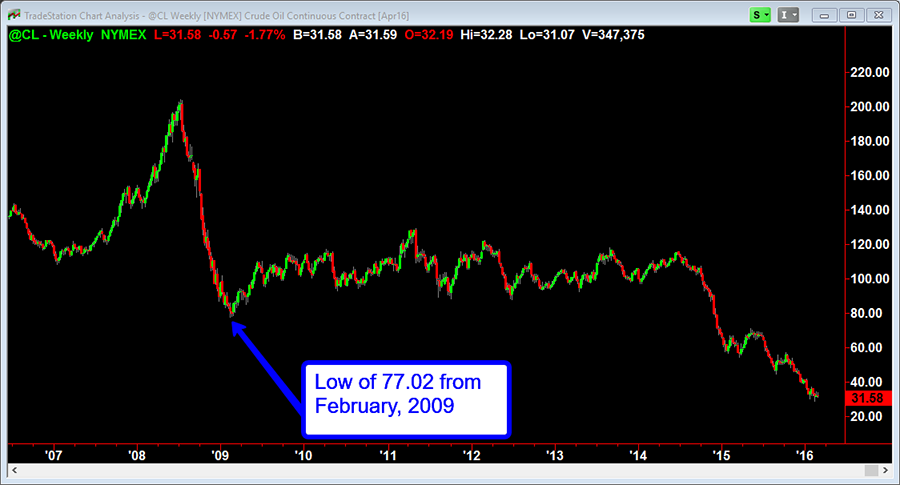 If one were trading crude the day of the low, then the active contract being traded was for March delivery. It’s code in TradeStation is CLH09 and the weekly chart for it is shown below: 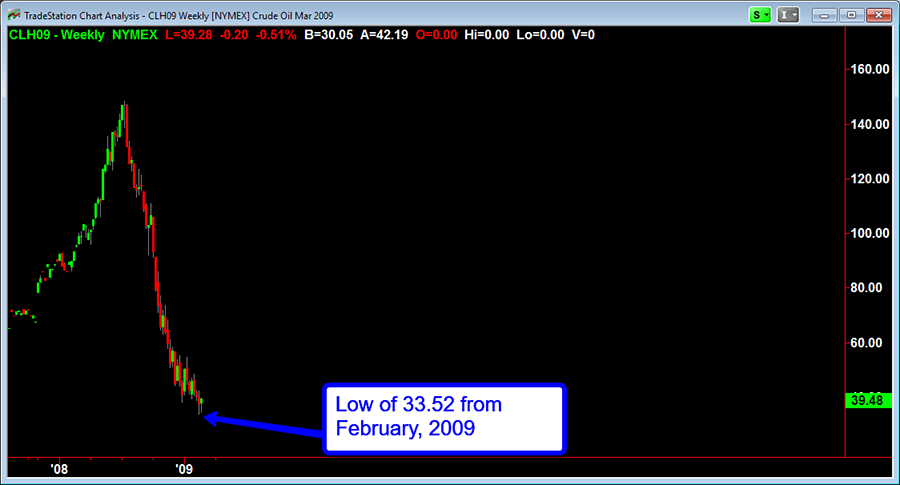 Notice that on the chart the low was 33.52. This is very different from the 77.02 shown for the continuous contract. This chart of the individual contract, is a “truth” chart. That 33.52 price actually traded and it formed a multi-year swing low. And while we can look at the chart and it represents some form of Truth, there are several reason why it might not meet our needs. The most obvious might be seen from the chart is that it only covers the period from February, 2006 when the contract first came

into existence until February, 2009 when it stopped trading. Furthermore, during much of that time, CLH09 contract wasn’t the front month active contract.

So what was the “truth” at the 2009 low? The reality is that there were many “truths” as can be shown in the chart below where each white lines represents the weekly close of one of many crude contracts. Each of these is its own truth of trades which happened at the time, but they were for crude oil to be delivered in a different month, hence different prices. 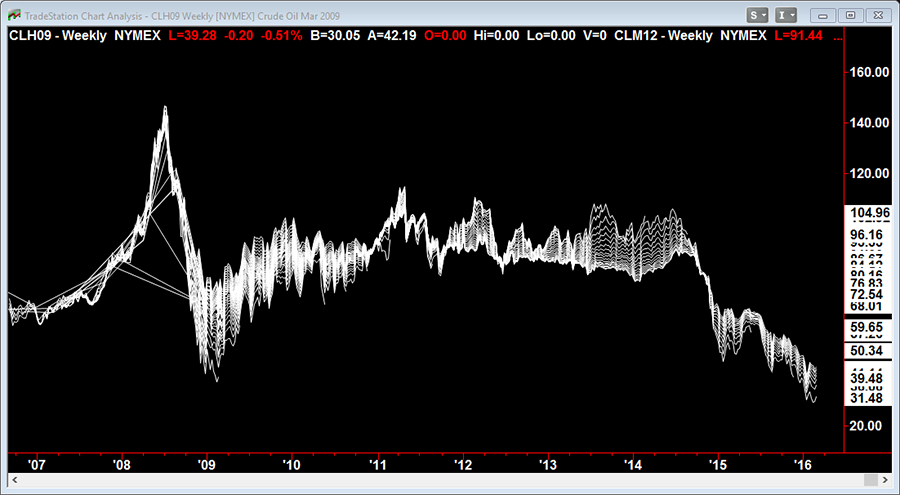 Even though these may represent trades which actually happened, comparing them is actually comparing apples to oranges. Furthermore, one can’t really compare 2009 to 2016 on a chart like this because many of the contracts which traded in 2009 are not still traded in 2016 and vice versa. 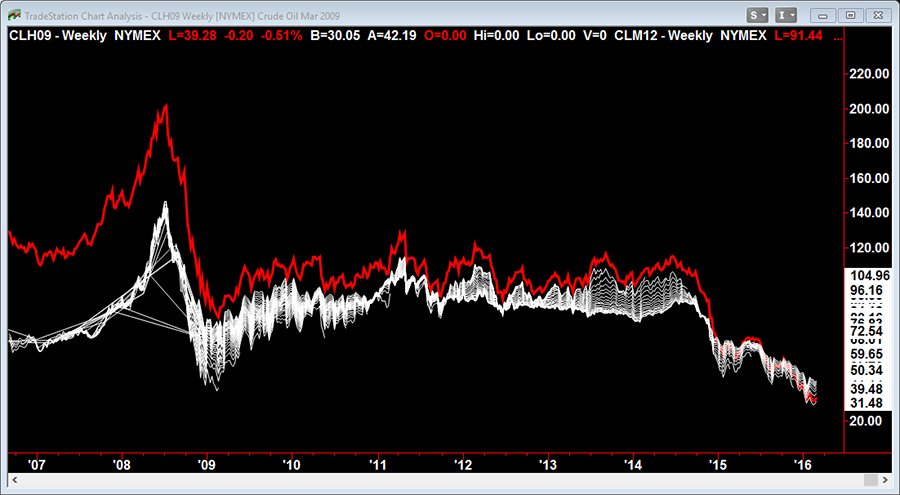 So let’s get back to our chart of Coffee, since I’m currently trading Coffee. Furthermore, my expectation is that Coffee will not be done heading down until we are back below 2013 lows. So let’s build a chart of Coffee similar to the chart above in Crude. Each of the individual contracts is in white and the continuous contract is in red. 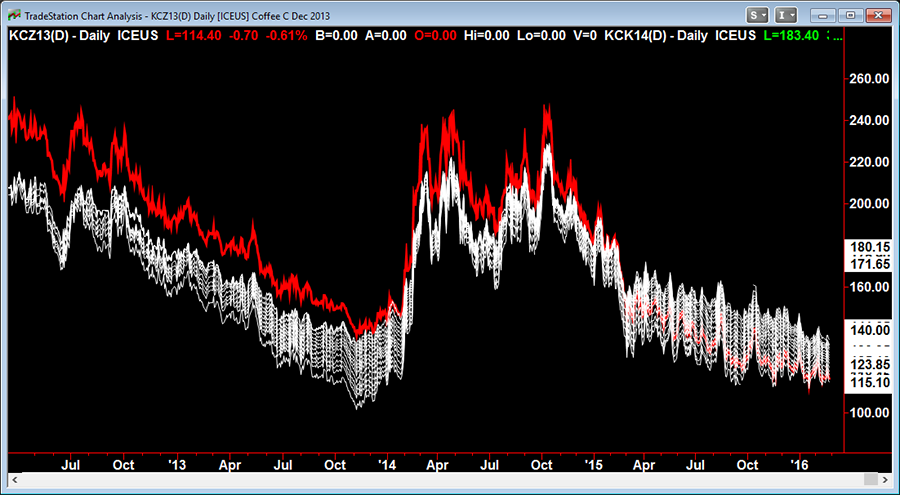 As I write, Coffee for May delivery settled earlier in the day for 116.05. Meanwhile, coffee for July delivery settled at 118.05. Why the difference. Well, imagine a farmer with coffee to sell. The 116.05 means that he can sell it for May delivery at a price of $1.1605 per pound. 37,500 pounds of coffee are deliverable for each futures contract sold. Since the farmer already has the Coffee he could also deliver it in July and collect even more money. But this is not without its costs: first, the coffee must be stored for an extra two months; second, the farmers cash (which he could collect in May) is now tied up for an extra two months so there is also an interest expense.

The price difference in futures contracts is usually a good representation of the cost of holding the underlying asset. If the spread between contracts diverges too much from the holding cost then arbitrageurs will usually step in and drive the prices back into line. In the case of physical commodities like Coffee or Crude oil the further out months generally (but not always) trade at a higher price than nearby months. In the case of assets like stock indices or bonds the nearby month futures can trade at a higher price. Unlike storing Coffee where there is only cost to storing, there is a benefit to holding a basket of S&P stocks in the form of dividends, or bonds in the form of interest received.

In addition to being able to trade the futures markets, these assets can also be traded in the spot market. That is, our coffee farmer can take his coffee into town and sell it today. The difference in what he can receive today versus what he can get in the futures market is, once again, generally dependent on the storage cost. As time goes forward and we get closer and closer to the delivery date the storage premium decreases and the futures price slowly converges to the spot price. That doesn’t mean the futures price goes either up or down, since the spot price can also be moving at the same time, it merely means that the difference between futures and spot prices will slowly decrease.

I will argue that the true price of coffee beans is the spot price, the price at which beans can be exchange for money right now. Sadly, I don’t have a data source for spot coffee so I cannot tell whether it is currently trading below 2013 levels. However, I know that my best approximation with data I have available is the contract nearest to expire as it has the least storage premium.

Right now, the nearest to expire is the May 2016. Back in November, 2013 the nearest to expire was the December 2013 contract. So what I want to do is compare these two contracts. To build a chart for this purpose I can use the symbol “@KC=100XN” instead of the more common “@KC” and it will look like this: 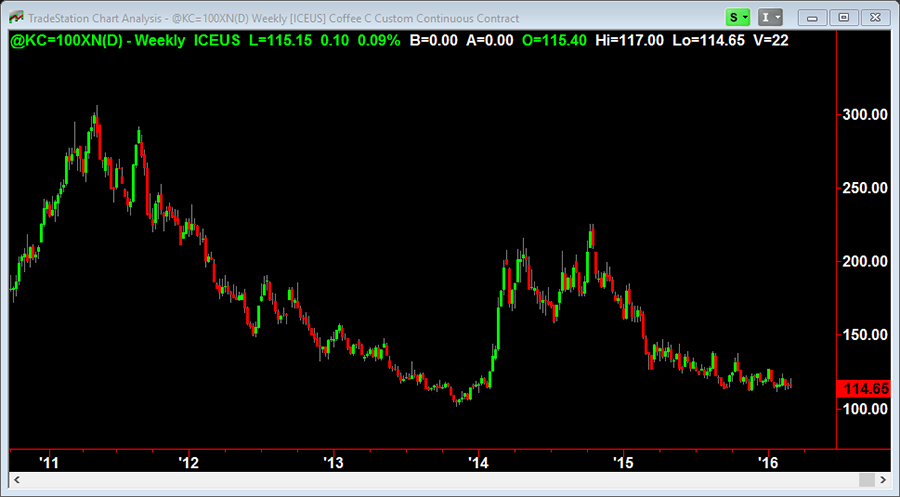 What this instructs TradeStation to do is to build me a long-term chart by stitching together the nearest to expire contracts. Once the current front month expires (presently KCK16) the chart will start plotting the next front month (KCN16) and so on. While it isn’t perfect, it tends to give us the best representation of spot which we can get from futures contracts. In this case I can clearly see that price is not yet below 2013 levels so I still expect more downside in Coffee.

There are a few different scenarios where the price distortions of a continuous contract create problems. One is the example where we’re comparing current price to historical prices. However, it can also impact the drawing of long-term trendlines. In all of these cases my preference is to chart the spot market, when data is available. For example, I prefer to do my long-term chart work on the cash S&P 500 index even if I end up taking my trades in the e-Mini S&P futures contract.

When spot market data isn’t available, I will produce a front month continuation chart like we did with Coffee. In TradeStation, this can be done by appending the “=100XN” to the end of any futures symbol. In ThinkOrSwim one can go into the style settings dialog and on the Futures tab uncheck the box which says “Adjust For Contract Changes.” However, keep in mind that while this change will give you a front-month continuation chart for intraday and daily charts. Anything longer term such as a 2-day bars, weekly, monthly, etc. unchecking this box will have no impact.

While the front month continuation contract may help us solve some problems, it is still a kind of fiction. As Sir Walter Scott wrote, “O, what a tangled web we weave when first we practice to deceive.” In that vein, the fiction of the front month continuation contract creates new and different problems to traders. We’ll discuss those issues in part 2 of this discussion.