So we finally had the 2020 election on Tuesday, but now it’s Wednesday and we don’t have an answer. I believe this was of no surprise to the vast majority of us, as we knew this year’s election was going to be just another crazy thing to add to the list of 2020.

As I write this, there are a handful of states still waiting to be decided and, from what I understand, it could go either way. The market sold off the week prior to the election which also was of no surprise. Who would want to be left holding the bag going into this uncertain and contested event? This week, from my chart perspective, the SPY bounced from an oversold double bottom. I had guided my subscribers into this idea with my weekly Moxie video and then we saw the markets actually move up when price bounced exactly off the 15 min 50 SMA.

The markets continue to rise, even the day after the election, despite the still uncertain outcome. I am a little surprised by that, but I am happy to see it because I much prefer an up market to a down one. This doesn’t mean I can just step right in at this point. The market is still range bound in a sideways oscillation and has not tested the hourly 50 SMA (like it did with the 15 min 50 SMA). 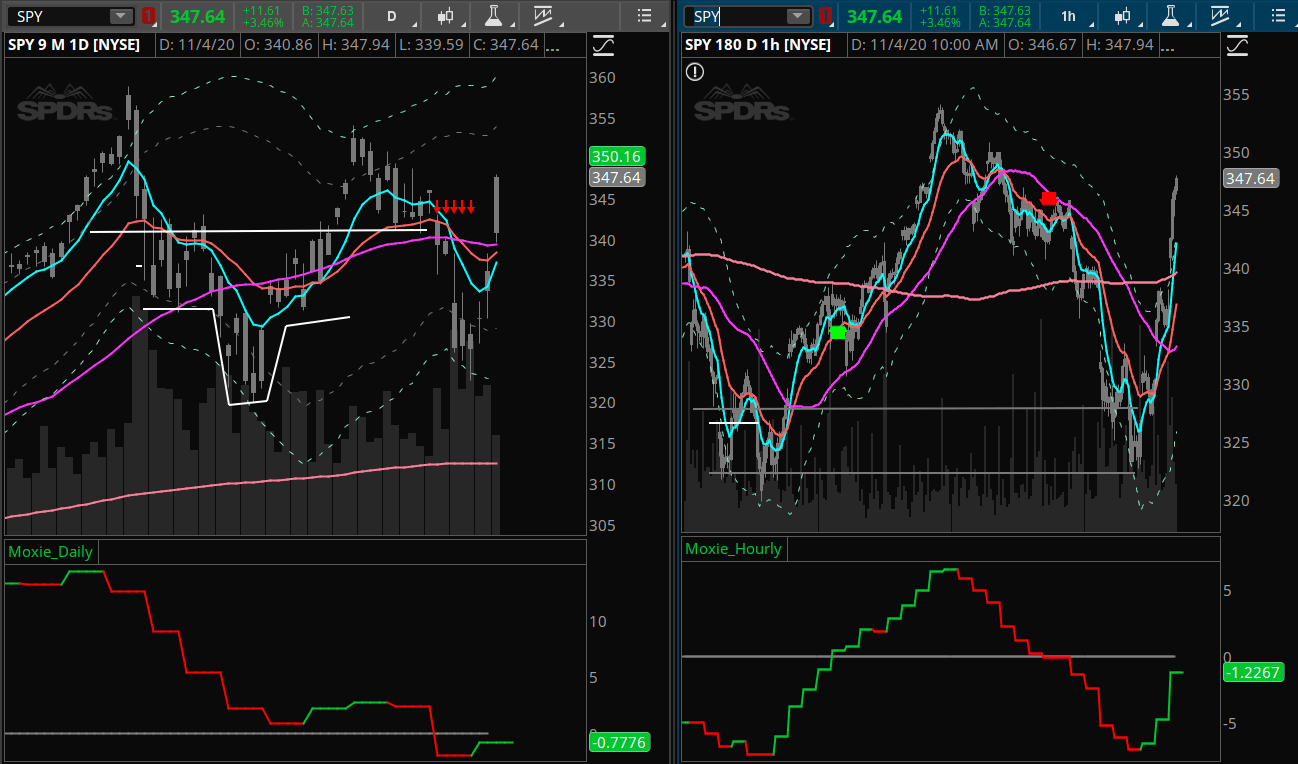 When, or if, the SPY comes back and tests the Hourly 50 SMA, this is where I will begin to confirm that the market is ready for the next leg up, possibly on its way to breaking out from the range. My rules confirmed that on the 15 min, now I want the 60 min.

There are also still a lot of earnings to be reported and I avoid those events as well. So this is a really great time to take a relaxing step away from the markets and, as a mentor of mine would say, “let the trade come to you”. I have written about this idea before, not really knowing what it meant in the past. Now, after years of watching the market’s movements, I know what I want to see from it and so I wait. In the meantime, I am studying, practicing, and searching for good looking chart setups. Particularly, I am keeping an eye on the cannabis sector because more states have legalized it. Also, I am keeping an ear out for which sectors will do better based on who wins the presidency. And I am enjoying the freedom of being 99% in cash, ready to go when the right opportunities present themselves to me in the right environment.

Over and Out,
Your Profit Pilot