In October we released a blog titled “The Die is Cast” that showed the underlying unhealthy conditions within the credit market.

We looked at the long-term yield curve as the signal of major stress building within the financial system.

These signals don’t come around frequently, they are often years or even decades apart, but each one has signaled a historic turning point for the market.

We noticed that the bond markets were one “event” away from a financial heart attack.

A few months later we got the answer to what that event would be – Coronavirus.

We stated that the event would be used by the media as a societal benchmark to reference back to and to justify the market drop to everyday folks. It has.

However, the real cause of the market volatility is the firing of the bond market signal we noticed in October.

We are now on the other side of the signal – the Rubicon has been crossed.

This is the same chart we looked at in the first blog. Notice the newly added box around where we are now.

The boxed areas on this chart represent all previous major market tops and were setups to market crashes.

The signal appears to have played out again for the fourth time in 30 years.

Notice the move first into deep inversion (red lines) and the subsequent “snapback” and higher close.

This “snapback” is what a financial heart attack looks like on a chart. We can see based on history, after the snapback, this chart goes vertical… that exacerbates the problem.

This is a daily chart of the SPX. We can see the reaction and chart damage that has been done in a very short time, down about 25% in a few weeks. Unprecedented speed.

So, where are we now? 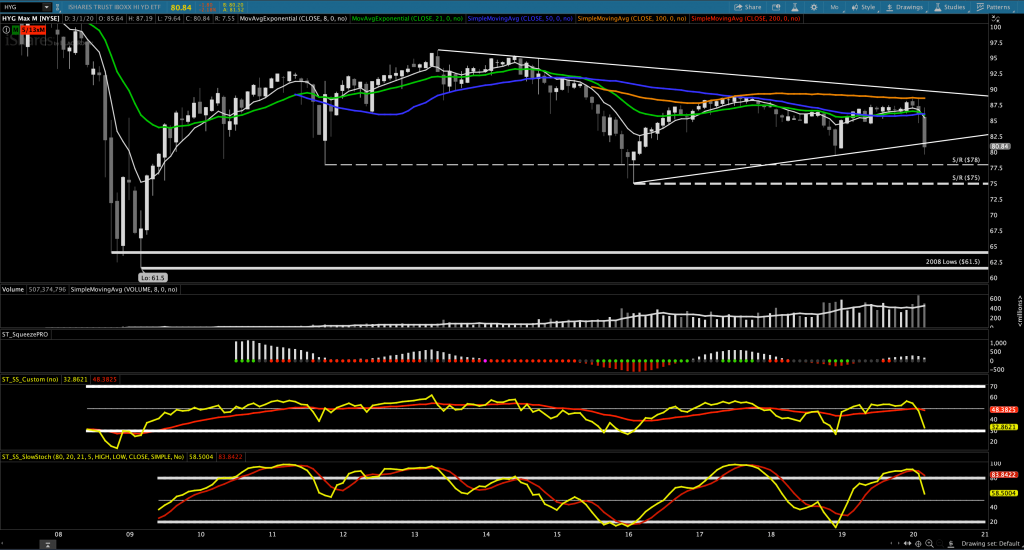 HYG is the next signal to follow and the next shoe to drop.

Let’s talk about why and how.

Junk bonds (HYG) are significant because the credit market is most fragile here.

As companies fail or default this chart will be driven lower.

A cycle develops where investors see other companies defaulting and pull their money from these investments… in turn raising the cost to borrow for these companies and increasing their chance of default, which further increases selling.

It can become a vicious cycle.

Why is HYG the signal? Let’s use an example… Oil company and Bank.

The price of oil recently plummeted. Oil Company was expecting a higher price for oil and may now be drilling at a loss at current prices.

Because Oil Company has high costs and high debt, they face a problem. They cannot stop drilling because they need income, but by drilling they are incurring losses on every barrel at current prices.

Unless the price of oil can rapidly go back up Oil Company is left drilling at a loss just to pay back old debt.

When they go to raise new debt, the market demands higher interest payments and the situation for Oil Company becomes untenable and they go bankrupt as they are unable to make money or issue debt.

The deal is that the credit markets are much like an ice cube tray. Enough liquid poured in to one tray invariably spills over to the others until all trays are full.

Or, maybe more appropriately, like the Titanic after the iceberg.

After Oil Company fails, investors in all junk bond sectors, not just energy, will reexamine their risk. This could lead to other sectors: industrials, retail, etc. also seeing a “credit crunch” as investor appetite for risky, high-yield junk debt is gone.

The problem becomes magnified well beyond the epicenter of the crisis, Oil Company, to the periphery and to all sectors.

Because Oil Company failed, other companies… Retail Store, Industrial Plant, etc. will have their debt interest raised, will have a more difficult time issuing or rolling debt, and will be faced with bankruptcy without access to affordable credit.

One large domino falling in the credit markets can lead to a chain reaction.

By watching HYG we can see this dynamic play out live on a chart.

Credit is the major risk in this market and the “reason” for the volatility.

This stress has been building in the system for years. It was allowed to fester and grow due to the Fed’s constant interventions and avoidance of price discovery.

A decade later, we face another potentially existential financial moment sowed by the very interventionist seeds planted during the last crisis.

In the previous blog we wrote:

Each time the yield curve is inverted historically it is like plaque buildup within the financial system… money is flowing but at a slower rate… this is the precursor.

Next, we have the “event” which traders and everyday people can look back upon and say, “that was the catalyst.” This is the equivalent of a financial heart attack after the plaque buildup phase.

Lastly, we have the “reaction” which every time is Fed lowering rates as a response to the event. This is the equivalent of being treated at hospital after the heart attack.

The unknown at the time was the “event.” Now that we are past that we are in the “reaction” phase.

So far it has been quite a reaction.

We have seen Fed promise $1.5T in additional repo liquidity, cut rates to zero, and expand QE to $700B. (Banks will hoard the liquidity, neutralizing the effect)

This is not a surprise because the patient is now in hospital and the uninspired “doctors” at the Fed working on it will do everything possible to prevent a flatline.

The question is will it work?

I don’t believe it will and here’s why.

The example I used in the previous blog was that of an unhealthy person eating cheeseburgers every day until the day they eat one too many and end up in hospital.

Now let’s say this person survives the heart attack. A good doctor may recommend they eat better and exercise more. That would be good, but slow.

The Fed Doctor, however, doesn’t have time for that. FedMD prefers shortcuts and the appearance of health over health. So, the Fed Dr. will recommend changing nothing and will offer liposuction, so the patient looks healthier.

The Fed is more concerned about appearance (investor confidence) than health (structural change).

But that’s worked before, why won’t it work now?

The simple answer is the problem was allowed to get too big, too global, and the Fed is out of significant tools.

We faced a similar situation in 2008, but the Fed at the time had 5% interest rates and thus multiple rate cut “bullets” left to fire.

As of today, they have none.

In 2008, not only did the Fed do extraordinary measures to stimulate, but a very underappreciated outside actor also helped.

China’s massive credit expansion and growth helped push everything higher as China became the engine of both growth and credit. China grew so much and so quickly after the previous crisis that it pulled the entire world up with it.

As of today, China no longer has that capability.

They have grown already. They are also now facing the same credit contraction everyone else has and are not in a position to be the global growth engine like in the previous decade.

So, where does the growth come from?

The answer is I do not know, and the market doesn’t seem to either.

I do not see any logical source of growth based on the current landscape without first going through an economically painful deflation cycle.

The economic forest is covered in deadwood and tall, rotted trees that block the sun and prevent new growth.

I see no way to change that, even with creative financial engineering, without first undergoing a brush fire to clear the forest of deadwood (zombie companies).

What’s the next domino?

The events described in the first blog come in two parts; the financial equivalent of a body blow followed by a secondary knockout punch.

In 2008, the body blow was Bear Stearns and the knockout punch was Lehman.

In 2020, the body blow was Coronavirus, at a time when everyone was long and overlevered.

The knockout punch that comes later is in the form of a “credit event.”

A credit event is when a large company with high debts is unable to make a payment which triggers a default chain of events.

Two companies I am looking at to be the catalyst of this credit event later this year are General Electric (GE) or a major oil producer/supplier.

After the credit event, we go right back to where it all began, the banks.
Who’s holding the bag for corporate debt? Banks.

It actually doesn’t matter how the credit event unfolds, as in all circumstances it has a loop-back to the banks where the problem becomes magnified.

Fortunately, I think American banks are slightly better positioned than 2008 so I don’t expect the problem to begin there.

For that, I am looking at European banks.

At the end of this cycle we will see a major European bank fail or be nationalized.

Based on size and exposure, my guess is that it will be Deutsche Bank (DB).

They have trillions in derivatives on their balance sheet and have been a problem child for years. This will be Europe’s Lehman moment.

The other candidate is HSBC, take the same idea and replace Europe with Asia.

Where the dominos fall from there is irrelevant. If things get that far the only question is whether the system will be able to pull itself away from the cliff and avoid the abyss.

I am not confident that it will be able because the Fed, and all central banks, used their ammunition during good times to prevent any volatility and now they have no tools that the market respects.

The yield curve signal plays out over a series of months, historically.

The next 6-8 months will be more critical to the financial system than any other time since 2008, and potentially since 1929.

This is unprecedented territory as usually during good times we prepare for the bad. This time, led by Fed, very few, including Fed, prepared.

Policy makers are facing the biggest problem they have ever faced: credit market disfunction, lack of liquidity, a global sudden-stop due to the virus, and no respectable tools left to respond with.

The Fed, for 11 years, intervened so much that they effectively became the market. In doing so, they broke price discovery and signals.

A novel coronavirus may go down in financial history as the catalyst, but we understand that consistent corrosion from a decade of Fed intervention is what caused the levee to finally break.

The longer-term trade that develops from the ideas in this blog – long government bonds (for now, as bonds are very mispriced), long Dollars and Yen, long gold (once volatility stabilizes), long pristine balance sheets. Short all financial assets on significant bounces.

Every bull ends the same way…

Hope took it up, credit brought it down.