Rising energy prices at the gas pump have made budgeting painful for consumers in this down market. However, this market could be primed for traders to take advantage of energy demand.

The global markets are in a high-stakes position as bullish traders seek lows that can hold or have a catalyst to propel them forward. The charts cannot withstand any breaks of support or any increase in the coiled momentum – which is currently on the side of the hibernating bears.

The three major indexes (Dow, Nasdaq, S&P 500) as a group have the same pattern – bear momentum positioning and a neutral bear price structure.

Overall, the major indices are soft as the stock market reacts to mega-cap tech earnings – Netflix, anyone?

The media streaming leader saw a giant drop in its stock price, losing 30% following the first quarter earnings release on Tuesday. The market also hears from Tesla, the airlines, and a host of Central Bank speakers on Thursday. All this attention on earnings as an escalating war in Europe fuels inflation and market volatility on a global scale.

Energy prices have been up-and-down for some time, but consumer demand isn’t slowing. Political shenanigans continue to twist this sector into knots at times. Still, this is a sector to consider with an air of caution and a determination to develop trade setups.

Volatility is also a key signal to watch across the stock market.

The volatility index (VIX) could reset with a higher series of weekly lows. The VIX could easily get back to 30+ and if it does, the implication is it will stick this time and likely make a new swing high to 40.

This is a dangerous position on volatility as it relates to the indexes. Traders should pay attention to this warning signal.

Bullish traders are in a difficult spot overall and there are areas for bulls to watch.

U.S. bonds have been beaten and battered. Traders looking for a low could watch the bond exchange-traded fund (ETF) TIP for opportunities for an entry which could precede a reversal or an oversold bounce.

Semiconductors have a clear head-and-shoulders pattern emerging on the daily chart. This is a wildly dangerous pattern for semis that predicts a bullish-to-bearish trend reversal. How dangerous? The possibility is that this could be enough to break the Nasdaq and therefore all markets.

While healthcare (XLV) has trend structure, the momentum isn’t quite right and traders would do well to consider only the best in this group.

What is a target for Simpler’s traders in this volatility?

A priority sector that looks good with potential to go higher is energy (XLE).

With oil there is solid structure and the potential to make new all-time highs. If oil sells off with the broader market somehow, that would be a very bearish signal. As for natural gas, the signals lined up for weeks and now it has taken the top off. This trend is actually early, but it’s a mile from support at the moment.

Energy sector sizzling hot – or not?

While the energy sector appears to be holding up, there are a few cautionary signs for traders to watch.

No sector appears to have the strength to bring the S&P 500 substantially higher. Energy, which has been the relative strength sector, has shown some signs of weakness on the charts with moving averages.

Crude has been below the 50 simple moving average (SMA) for several sessions. Some moving average crosses have appeared as crude trades below resistance. It’s not unreasonable to anticipate that crude could drop lower and bring energy along with it.

While energy has been the relative strength sector, some of the levels are extended and could revert back down.

This is a sector to watch closely for potential bearish or “buy-the-dip” trades.

Where is the transport sector headed?

When prices at the pump go up, this causes weaknesses in related sectors, such as the transport sector.

The team at Simpler Trading prefers more often than not to find short setups to the downside as earnings reports signal weakness in transports.

For example, Boeing, which has struggled for several years, is still in unknown territory. It could be difficult to imagine this stock situation improving in the near future.

Boeing recently said global geopolitical concerns are a major factor in dropping a large number of aircraft from its backlog of pending orders. While Boeing did not identify the customers, the company previously indicated that it had undelivered orders for commercial air carriers operating in Russia and Ukraine.

The same problems that plague the transportation exchange-traded fund IYT also create more headaches for Boeing – supply chain issues and the rising prices of key components. Traders are eyeing more moves to the downside for Boeing.

This makes trading short on Boeing potentially viable. The statistics support shorting Boeing stock. This company tends to drop quite a bit prior to earnings – set for April 27.

With less than a week until earnings, that means that with a squeeze setting up and a low in place, we’re watching for a downside target.

Boeing has only beaten estimates three out of the last eight quarters – which is a pretty poor showing. Although the last three quarters in a row the stock did trade marginally higher. Boeing really couldn’t use any of those reports to shift patterns to the upside. Even though the company marginally traded higher after earnings, it ended up rolling right back over.

Stepping back for a look at this sector, transport companies in general have been hanging on very near the edge of a cliff. In light of the weekly squeeze and broken-down weekly chart pattern, traders may see an even further move to the downside across the transport sector.

The technology sector does not do well with interest rate hikes and this may present traders with opportunities for short trades.

Facebook, Netflix, and Pinterest have the potential for short trades as these tickers previously had grown too extended during 2020 and 2021. These tickers finally came back to Earth over recent sessions.

When traders look at the charts, the same pattern applies where a stock that is close to previous lows encounters resistance that could easily bring on even more destruction.

Twitter offers up the potential for shorting for a time. Elon Musk made the news with a large purchase of Twitter stock, but the board is rejecting his offer of a full buyout and taking the company private. Recent news revealed he may push for a hostile takeover. How this saga ends remains to be seen, and it makes for a cautious trading scenario with TWTR.

The big banks of the financial sector began releasing their quarterly numbers in a bearish market. These earnings are revealing about the economy in general. The financial sector historically tends to benefit from inflation and interest rate hikes – as long as the broader economy is strong.

Results of bank earnings were a mixed bag and the outlook of banks remains bearish due to the flattening of the yield curve.

Banking companies such as JP Morgan Chase, Wells Fargo, Goldman Sachs, and Citigroup dominate performance of the financial sector. The second quarter may behave differently from the first as it began with a spike in long-term bond yields.

First-quarter news headlines were significantly more negative than in previous quarters and could have contributed to investor sentiment. Efforts to curb business with Russia and concerns about the economy have also impacted finance.

The inverted yield curve – the relationship between the two-year and the 10-year treasury bond which has the potential to signal a potential recession – is not expected to affect the first-quarter reports from banks.

However, interest rates and technology tend to have an inverse relationship. When the 10-year yield shot higher – which resulted in technology breaking lower – this sent the technology-laden Nasdaq breaking below key support.

How to trade in the middle of volatility

With so many points of contention across the market, sectors, and stocks, the question becomes, “How do you trade this volatility?”

With sector strength at the forefront of trading strategy, traders should consider which sectors have signals that show support.

When traders take a look at numbers that relate to inflation, the discretionary sector – high-end clothing, big-screen televisions, family vacations, sporting goods – is a major area that has been impacted. When consumers cut back, they choose to cut back on luxury items first. The discretionary sector has been breaking down and this suggests it could easily re-test new lows.

Traders wanting to manage risk might consider a spread setup. Traders at Simpler use these setups,  such as selling call-credit-spreads or selling calls. Opportunities also exist in this market to trade using butterflies with a downside target.

As always, Simpler’s traders tend to avoid selling options on stocks that are in the middle of an earnings season.

With any of these setups – selling calls, buying puts, butterflies – it is important to find the setup first and then decide whether the trade is worth the risk. 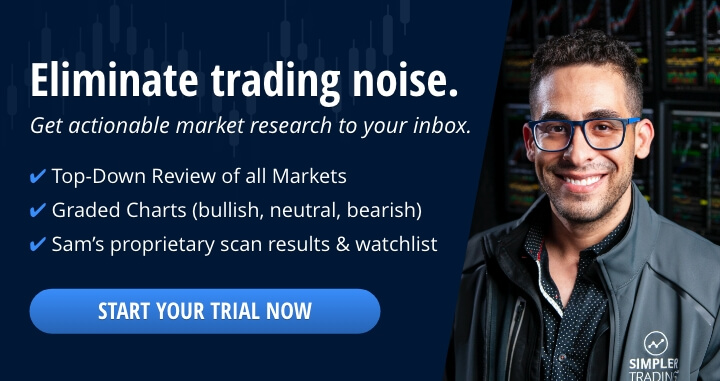