I made over $1,000,000 in one day trading Tesla using options strategies. And this isn’t the first time. In trading, we’re going to miss a lot of moves, but sometimes, we see opportunities where everything lines up and we do a full-court press.

Back in 2014, I made my first million dollar Tesla trade. At the time, Tesla was trading at about $150 a share. I noticed a few things about the stock:

So I bought call options and shares of stock and continued to buy more as Tesla’s price rose.

The toughest part was holding on when I was up ‘only’ $300,000. Should I hang on or just get out and call it a day? I had my setup, it was still in play, so I held on. Watching my $300,000 profit fall to about a $100,000 profit caused more than a few drops of sweat to form on my forehead. But I kept thinking, “The volume is here. Shorts are screwed. These opportunities don’t come along very often. Hold on.”

After that short pullback, Tesla rallied throughout the rest of the day. Up just over $1,000,000 on the day, I closed out half my position . . . then slept a few hours that night. I woke up at 3:30am and couldn’t go back to sleep. I watched the pre-market bid ask spread as the market crept towards the cash open. It gapped up around $15.00 and I got out as quick as I could, booking another $500,000 on the trade, for a total of just over $1,500,000. This was my biggest trade ever, and it was a time when all my training in trading came together — a perfect storm.

Now I don’t enter the trading day and think, “Today, my goal is to make a $1,000,000 trade.” (Or I have found that when I do, that usually leads to a very poor trading day as I try to project my will onto a market that doesn’t care what I think). My goal is to look for setups that fit my criteria, be patient on my entry, be patient on the exit, and don’t let my emotions interfere. And most importantly, be ruthless about cutting trades loose that aren’t working. I really put this into practice when I blew up a 100k account in the beginning of my trading career. One of the most important things I learned was to focus on the setup, not the money. Any time I attached money to the trade, my trading psychology went out the window. Focus on the setup. We see a small profit and we want to jump off the train, we see a loss and we wait and hope it comes back. This is a surefire way to chop your account into pieces.

My goals were no different for my second million dollar Tesla trade. On May 29th, 2020, my Multi-Squeeze Pro indicator showed energy building up in Tesla stock around a share price of $820. My Multi-Histogram Pro Indicator showed that momentum had a bullish bias. Everything was aligning for this stock to breakout and possibly test $1000.
With Tesla near its all-time highs, all time frames looking bullish, and the energy that had been building up in the stock — this move looked like it was going to be explosive. A few days later on June 8th and 9th, I continued to add to my position as it went my way, building it into a large piece of my overall portfolio. The chart looked about as bullish as a setup can look. Like a bull ready to break down the fence and run to the other side. When there’s this high degree of confidence, these are moments in time where you can place bigger trades.

I’m a professional trader, and it’s important to act like one in these situations. I wasn’t emotional, I focused on the chart, not the profit. When I closed out the trade, I went into the kitchen to get some water. My wife had no idea what just happened. When I showed her later, she was incredulous. Why didn’t you say anything before? Why weren’t you excited? Don’t get me wrong. I like making money. But I’ve been doing this long enough to know that being angry about losses and celebrating wins sends the wrong message to your brain about trading. It’s not about chasing the dopamine hits. Or feeling shame when things don’t work out. It’s about doing the job, which is identifying the setup and following the plan.

When we focus on the profit, we exit trades too soon, or we let losses run. When I focus on the chart, I ask myself, “is the reason I got into this trade still valid?” If the answer is “yes” it’s not time to exit the trade. Or, “Would I enter this trade here?” If the answer is no, it’s time to get out.
The key is patience. I’ve never met a successful impatient trader. The two just don’t work. There are bold traders. There are old traders. But there are no bold, old traders.

The day before the big move, Tesla sold off at the end of the day. I was disappointed. I saw it ready to breakout and I was ready for it to get going. This is never fun when this happens, but the plan didn’t change, so after a few deep breaths I got my brain back. I was imposing my will on the market. That never works. Just let the markets unfold.

So did I sleep that night? I did. I slept pretty well, woke up at 5:30am and saw that Tesla was down $5 pre-market. Ok, nothing exciting. I closed my eyes and went back to sleep. I had my setup, it was still valid, so hang on. I slept through the upgrades and tweets. When I woke up an hour later, it was trading near $985 pre market, up $45.00. What’s funny is I was almost angry for a fraction of a second. “You could have just done this at the close yesterday.” That’s that mental chatter. Which is total garbage. It’s so important to be mindful and dismiss that mental chatter, which is more worthless than used toilet paper. The key is to become aware of it and dismiss it vs. staying unaware and becoming it.

Patience gave me the opportunity to profit from this setup in Tesla. The absence of fear let me get into the trade ahead of the move instead of after the move already happened. I’ve also never met a successful trader that chases moves. You can never confirm 100% that the trade is going to work out. Once you are in the trade, the moment it looks amazing and you are giving yourself high fives is the time to get out. Don’t get greedy.

Although I had the guts to stay in the trade even when it dipped against me, I also got out a little too early. At $995 I dumped 90% of my position. Why? I wouldn’t buy it there. I missed out on another $40 of upside but that’s ok. The best houses in the best neighborhoods all belong to people who sold too soon. Not too quick – too soon. There’s a difference. Selling too quickly is taking small profits for the fear of losing them. Selling too soon is getting out at a point where you wouldn’t want to buy it.

This balance of patience and the guts to hang on, brings up opportunities that are very rare in a trader’s career. It’s important to be ready for that. Not to plan for it, not to hope for it, and not to wish for it. But to just be ready to take advantage of it and manage your emotions during these high conviction trades. Recognize and execute.

Thankfully, I was able to take advantage of these opportunities because I’m able to watch the markets consistently and trust my indicators. However, I know that’s not the case for everyone, which is why I made sure to share those entry and exit points through trade alerts, both times, for my 2014 and 2020 million dollar trades. And if the setup presents itself again… I plan to do the same. If you’re interested in receiving these alerts, join me in the Options Gold Membership here. 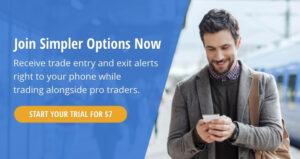