There is a setup in the markets currently that mirrors the setup just before Black Monday in 1987 that you should be aware of.

This does not mean that history repeats; as traders we look at probabilities first.

Let me make the case:

In 1987, from June to October, the market was seeing a winning streak of new highs. The psychology at the time was one that the market would go higher and higher despite the deteriorating economic fundamentals, and it did… until it didn’t.

Let’s take a look at the charts. (This is a chart that is circulating on Twitter showing the two timelines juxtaposed): 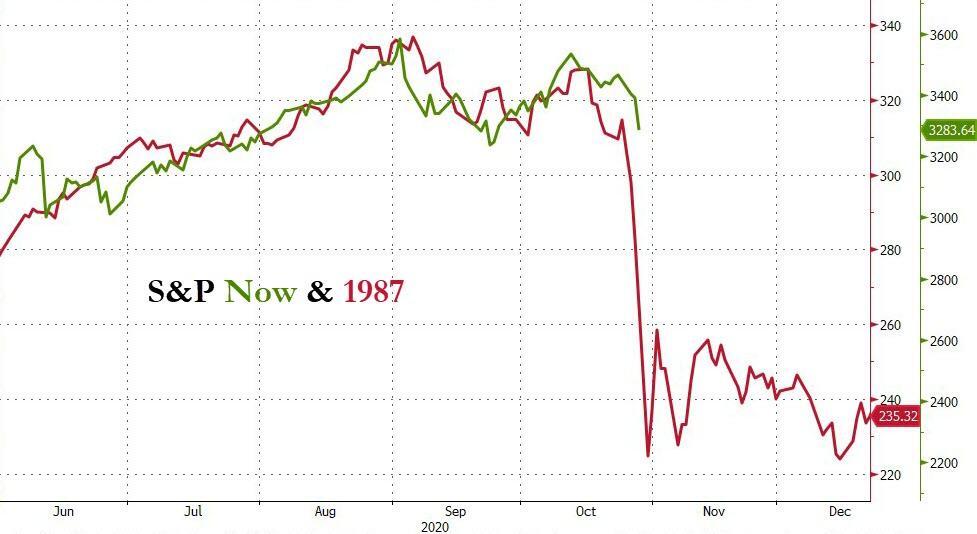 Here we can see the dynamic between the two time periods.

Months of steady uptrend, a slight price break, a lower double top, a few days of selling, and finally the Monday that took it down. Very similar visually.

Now, what do we have at the current time?

We have a market that has been in a rip-roaring uptrend since the March lows.

We have a market that double topped at a lower high.

We have a market that has seen steady days of selling, which has broken all daily trend structures on the indexes and many key stocks.

We have a market where VIX is over 30 now.

We have a market where the dollar appears to have a short-term bottom.

We have a market where the fundamentals are rapidly deteriorating and, as Europe enters another lockdown, central banks are admittedly out of firepower.

Oh, and we may also have an election coming up that probabilistically will be contested for 75+ days after the election.

So, what does that tell me? It says that the probability of a repeat of 1987 is much higher than it has ever been for the coming weeks.

I am actually entertaining the idea it could happen as soon as Monday, November 2nd.

How to play this? For most, the play will be to be sized smaller and/or to be in cash to be able to take opportunities that happen.

For the experienced, if the signal triggers, the play is to short the indexes or go long volatility.

This does not mean that any of these things have to happen. In fact, if the election is uncontested and clean, we may see the opposite, but what do you think the chances of that are?

As traders, all we can do is view the world probabilistically… take the views presented here and play devil’s advocate against them. Follow your plan and tread carefully.