What Are The Best Trading Computer Specs 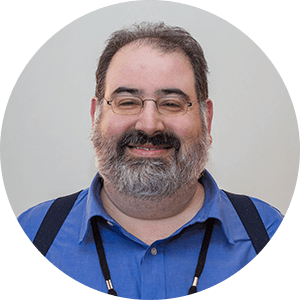 My current trading computer is about four years old. There’s no reason to tempt fate and see just how long it can last – it is time for a new one. So let’s take a quick break from trading and talk about trading computers.

Just as I prefer to build my own indicators and do my own analysis of markets, I like to build my own computers. Building your own isn’t for everyone and you may even be able to get a computer for less money by buying it as a complete bundle. But even if you’re having someone else build your day trading computer for you, a discussion of what components to use and how to select the best specs might be useful.

This specific computer isn’t for everyone, it’s just what I’m choosing to build for me to support the way I use my trading computer, have my monitors set up, etc. In this post, I’ll share with you the plan for the new system and the choices I’ve made. Then I’ll follow up later as I actually build and use it.

All of the parts are here except for some of the cooling components. Once everything is here I will start the build. 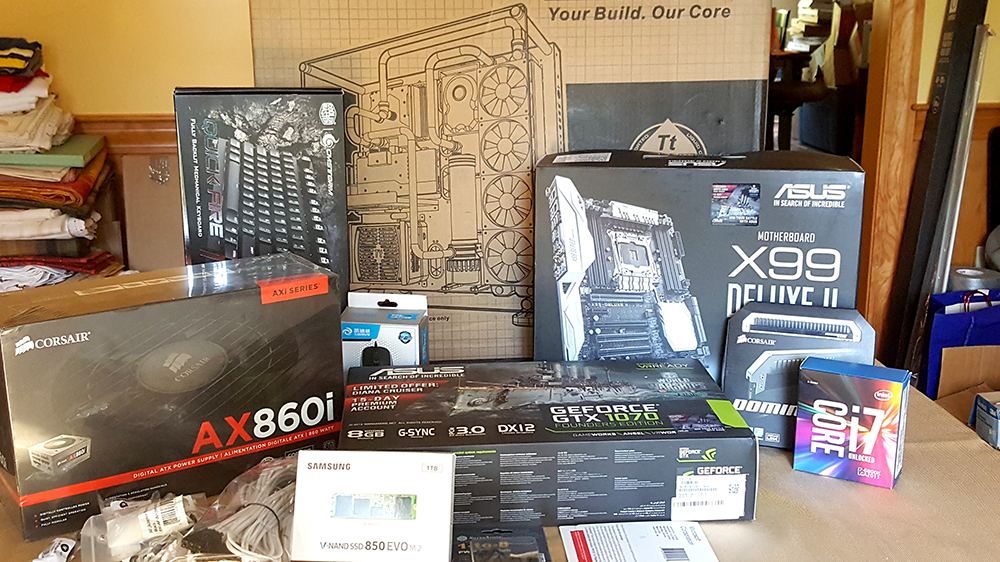 I run my main computer 24×7. During the trading day, I have at least four different trading platforms open, as well as multiple chat rooms and websites, and even custom stock scanning software which I built myself. Overnight, the scanner and several systems set up to send me alerts continue to run. The system is under heavy load. So my goal is to have a computer that can keep up with the load as well as be stable and reliable.

While the computer is being replaced, I am going to keep my existing monitor setup which includes a single 55” 4K TV connected with HDMI and two 24” monitors connected via DisplayPort connectors.

There are several things that stand out in how I will use the computer which will affect my choice of components:

* It must support many applications running simultaneously.

* It must run reliably.

* It must support my three monitors and up to 4K resolution on one of them.

So I’m starting my plan with an Intel Core i7-6800K CPU. The i7 is at the high end of Intel’s consumer CPU line, and the first mainstream CPU to offer 6 cores. Without getting too technical, cores are what allow computers to do more than one thing at once. Think of each one as a worker doing what a program requires.

Now think of a computer program as a recipe that instructs the computer to do certain steps in a certain order to make a tasty meal. Only certain recipes are written in a way that more than one worker can work on them at the same time. Likewise, only specially written programs can take advantage of

multiple cores. Some trading platforms are written this way, but many aren’t. But in my case, I have so many programs running at the same time I will certainly benefit from having more workers even if each one isn’t built to take advantage of it on its own.

Beyond the number of cores, the speed of the processor is important. The CPU I’ve chosen runs at 3.6 GHz – that’s a measure of how fast each core is running. There are faster processors out there. In fact, a 4.0 GHz processor with 4 cores is less money than the one I’ve chosen. While each of my cores runs 10% slower, I will have 50% more cores so overall much more work will get done. This is very well suited to how I will be using the computer.

The computer motherboard plays the role of connecting the CPU with all of the other components such as the memory, the video card, and more. Think of it as the system of roads which connects all of the components of the computer. Additionally, most modern motherboards now incorporate functions like networking ports, audio, hard drive controllers, and many other functions which used to be separate. Because so many components are now built-in to the motherboard, which one you choose will have an impact on what features exist on your computer, although some can be added on.

While the onboard features are important and are also the easiest to check off on a list, the nature of the interconnections is the most important. Going back to our road system analogy, the motherboard determines not only the speed limit on the roads, but how many lanes wide they are, and whether there is any cross-traffic. The motherboard I’ve chosen is the ASUS X99 Deluxe II. It has wide superhighways going to the components which need them the most: RAM, video cards, and hard drives. It also has tons of features. Many I don’t plan to use right now, but having them on the motherboard reduces the chance that a future need will require me to get a whole new computer.

I have had a very good experience with ASUS motherboards. They are well built with quality components that last a long time. They also manage heat very well and this is critical to keeping a system stable over long periods.

It doesn’t matter how fast the CPU is, if the programs being used need more memory than is available, the computer will slow to a crawl. Furthermore, if the CPU is waiting to get to that memory it will also become sluggish. So it is important to have enough memory and fast memory. I have had a mostly good experience with Corsair memory in the past, although I have had Corsair memory fail on me in the past, something I can’t say about ASUS motherboards. In any case, I’ve gone with the 32GB Corsair Dominator Platinum DDR4 3200 memory. If 32GB isn’t enough I can always add more to this motherboard, and this is fast memory.

For the video card, I’ve chosen the ASUS GeForce GTX 1070. Like motherboards, I have had a good experience with the durability and stability of ASUS video cards. They might cost a bit more than other manufacturers. I expect that this might be overkill for my needs, but it should handle all three of my displays.

My hard drive will be a Samsung 850 EVO 1 TB M.2 SSD. Faster, newer technology SSDs are both available and supported by this motherboard, but not with an expansive 1TB of capacity. I like these M.2 SSDs. They’re fast, require no cabling to block airflow, and connect to the PCIe bus for fast data transfer. With that said, even though my motherboard has built-in RAID capability, it will not support using multiple M.2 SSDs in RAID as a boot drive. So this will be my first computer in many years without redundant boot drives. However, I will back it up regularly and I expect this to be more reliable than mechanical drives. I might look into adding redundant boot drives in the future.

Heat is the enemy of computer equipment and keeping everything running cool is essential to having a reliable system. I will be using a water cooling system to keep everything nice and chilly. If you’re unfamiliar with water cooling, it is basically a replacement for cooling the computer by blowing air through the case. Basically, special fixtures are attached to heat-producing components like the CPU. The liquid is passed through the fixture causing it to cool down whatever it is in contact with and this can generally conduct away more heat than with just air. Then the liquid is passed through a radiator, similar to what might be found on a car, to cool the liquid back down before it is pumped through again.

In the past, I have used a self-contained water cooler for just the CPU, but in this computer, I am going to build a custom cooler for the CPU, heat-producing components on the motherboard, and the graphics card. This will probably be the most involved part of the build. Most of the other components just snap together, but the tubing for the water cooling needs to be specially routed to each component. Once it is all built it needs to be thoroughly tested and checked for leaks before using it on a computer that is powered on. But when it’s done, the computer should run cool and quiet.

All of the water cooling components are coming from EK Waterblocks. They custom manufacture fixtures for the motherboard I’ll be using as well as the video card. While parts from different manufacturers can be mixed and matched, since this is my first water-cooled build, I’ll just get everything from one place. Some of the parts are built when the system is ordered and EK is based out of Slovenia, so I might be waiting for a bit before I build the computer, but I want it done right.

Neither EK nor any other company makes a water block fixture for the SSD. When SSDs get too hot, they throttle back the speed so they don’t overheat. So to keep it running fast, it has to be kept cool. But with the rest of the system water-cooled, my case might not have much airflow to cool the SSD. So I’ll be installing copper heatsinks directly on the chips of the SSD to keep it cool.

The whole thing will be powered by a Corsair AX860i power supply. 860 watts is sufficient for this system and some expansion and I have good experience with Corsair. Furthermore, it is fully modular, meaning cables that run from the power supply to all the other components can be snapped in and out. This makes it easy to route cables neatly and leave out unnecessary wires. Neat cases not only look better, but run cooler.

And speaking of looks, this should be a pretty darned attractive computer when it’s all done. The minimalist approach to components will keep it neat and clean. Water cooling fluid is usually colored

and neatly run tubes should be attractive. So we’ll show everything off in a Thermaltake Core P5 case. These cases are completely open air with a glass front to see everything inside. The case can even be wall-mounted. Since everything inside will be visible, I’ll try to color coordinate. The motherboard has white accents so I’ll use white coolant and also custom white cabling for the power supply.

I can’t rule out that I’ve missed something which I’ll need to buy when building the computer, but below is the list of all the parts which I’ve ordered for this trading computer.

For more information on trading computers specs, or to ask a question, send a message to our Simpler Tech team here.

Should I build my own trading computer?

Remember that building your own isn’t for everyone and you may be able to get a cheaper computer as a complete bundle. In such a case, a discussion of what components to use and how to select the best specs might be useful.

Q: What computer specs do I need for day trading?

A: Make sure that your computer specs are good enough to support many applications running simultaneously, run them reliably, and support all your monitors (3 of them in my case, and up to 4K resolution on one of them).

Q: What CPU is best for day trading?

A: While there is no one answer to that question, I use Intel Core i7-6800K CPU.

Here at Simpler Trading, we understand that trading can be overwhelming, but we have experienced professionals that can help. Sign up today and join us in Simpler Free Trading Room for a learning center, live trading, and trade alerts. Don’t trade alone again.