The Shift In Tesla

TSLA has been on the run the past several weeks with shares gaining 10% in the last 5 trading days and 40% from the June 3rd lows. We’ve been able to participate in some of this bullish momentum using one of my favorite methods of technical analysis, Symmetry. In this case, Symmetry in Price. Symmetry can also be measured in time, but for the purpose of this article we’re going to focus on the price axis, or the y-axis of the chart. I’m using a daily chart for this example because the daily time frame is one of my favorites for developing swing based trade ideas.

Looking at our first chart of TSLA we see the stock has been in a steady decline from the highs of $379.49 made on December 7th down into the lows of $176.99 made on June 3rd. This is the primary bearish trend. Inside this bearish trend there have been several rallies. Some were larger than others, but each of them was followed by more selling. I’ve numbered the rallies I consider significant in this move from 1 to 7. 7 being the bullish swing that is currently still in progress and would use $278.32 and $308.71 as the next key areas of resistance, but we’ll get to that. 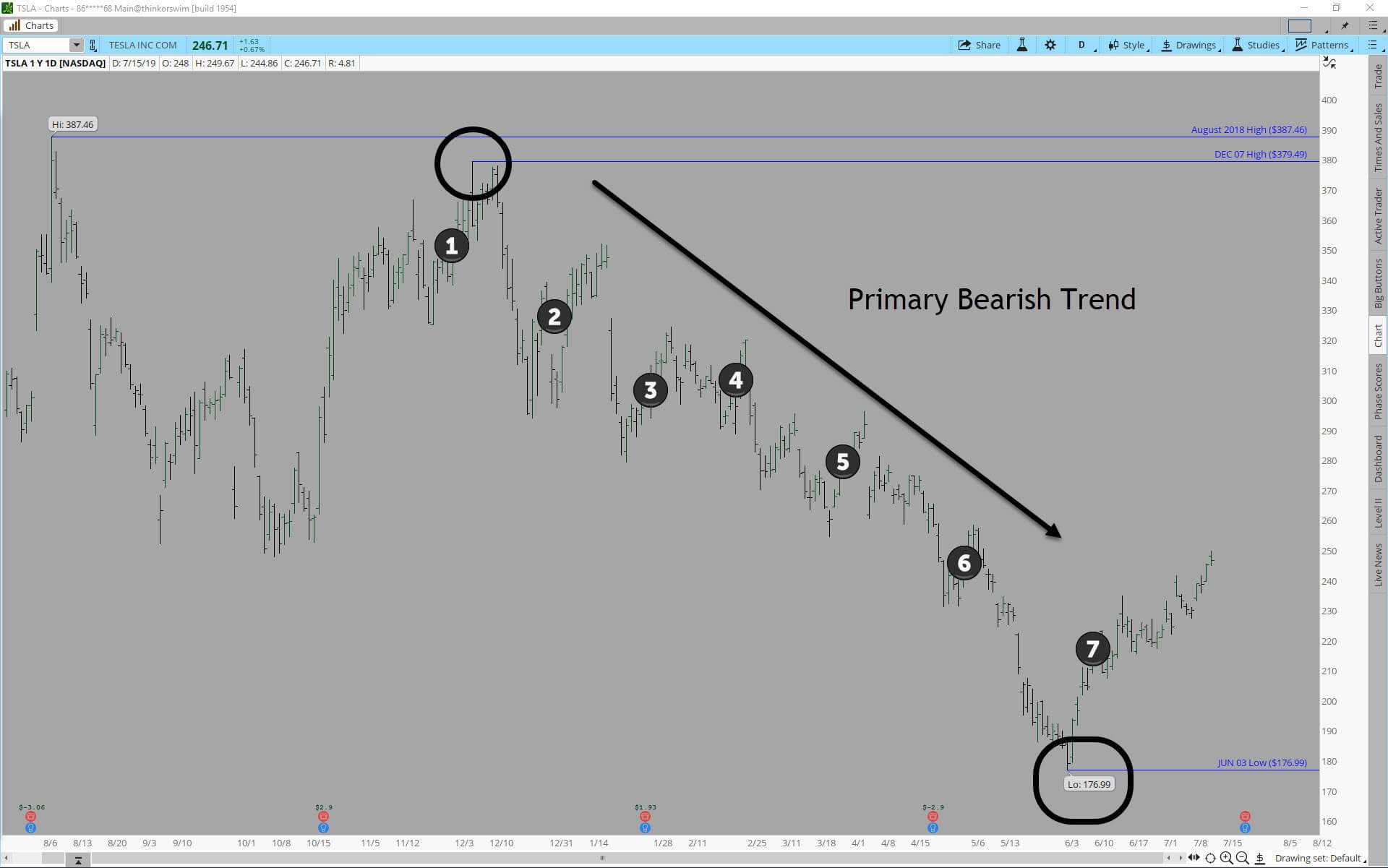 First we want to look at why this rally is different. I’ve always considered the rally that precedes a stock’s decline a vital swing of symmetry to look for. This was the last relevant push bulls made before the sharp change in pattern. In our TSLA example this was the swing from the November 26th low into the December 7th high. In a way, I feel this swing sets a precedent. In this swing TSLA rallied $54.49, then sold off $85.40. Provided any future rallies do not exceed this $54.49 ascent from their lows, then they’re still part of the overall bearish trend. It’s another way of saying “this rally is exactly what we went through right before we had the last big fall.” 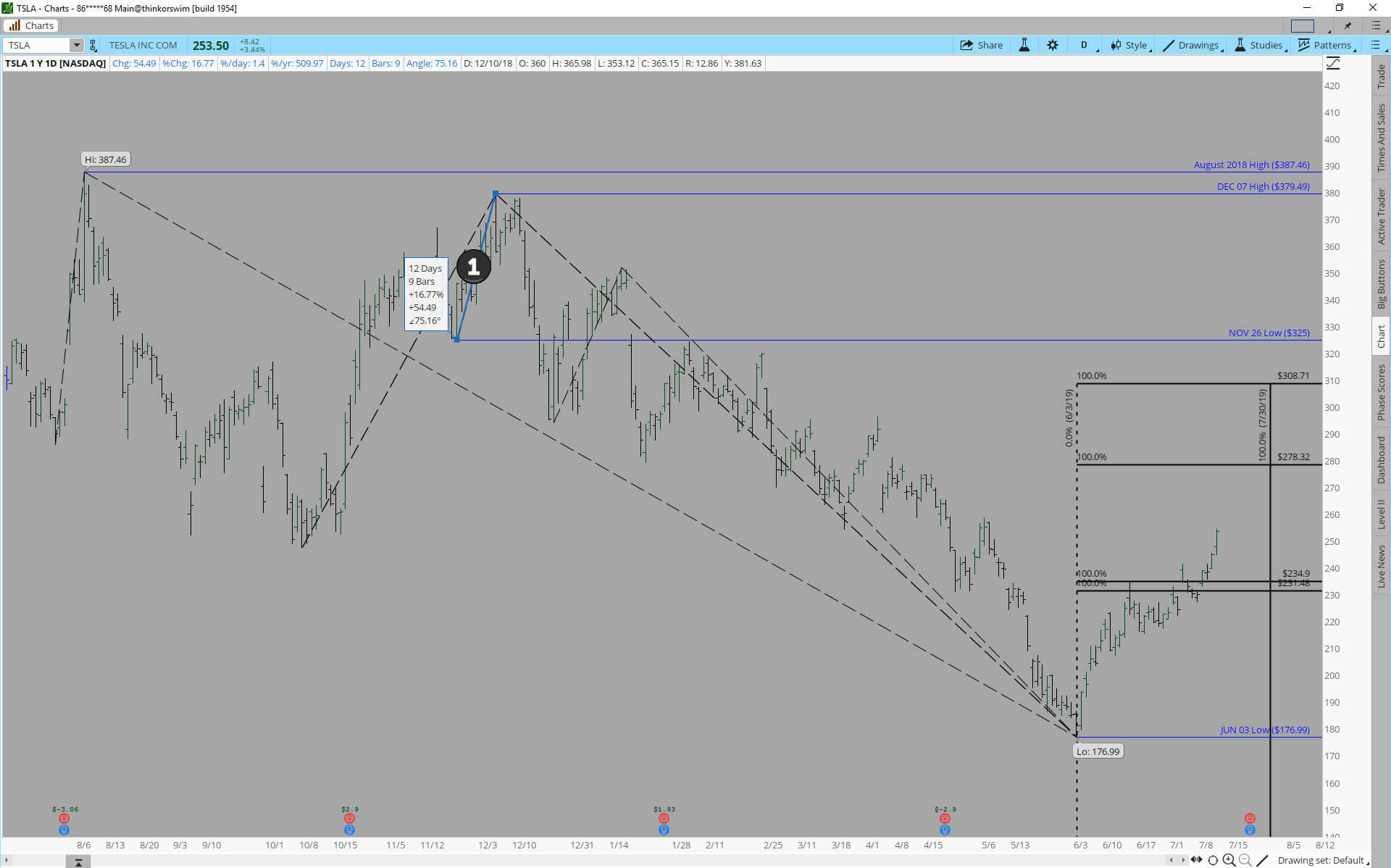 Knowing that, we have to be a little flexible with the concept but let’s look at the subsequent rally, labeled as swing 2. This move was a $57.91 bounce from the lows then shares broke lower again, ultimately selling off all the way into June. In the rallies that followed no gain was larger than this average rally of $56.50 that the first two rallies set the precedent for – until now. 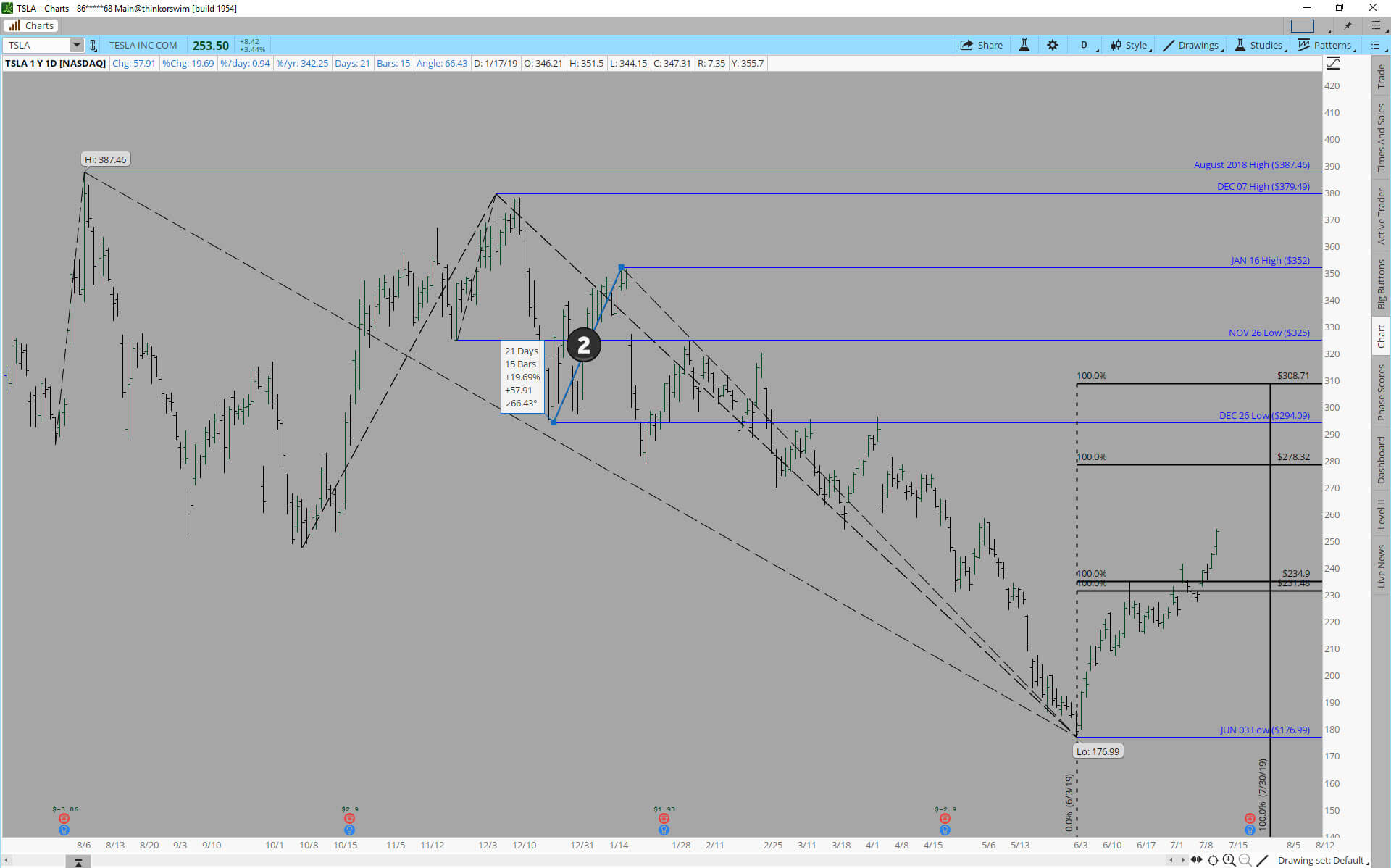 This is what setup this trade for me, and then I started adding to it when John began pursuing it off the daily Squeeze. The current rally has finally exceeded the $55 rally norm that had plagued the first half of 2018. Notice how important this resistance was when we tested it the first time on June 18th. This rally was a $57.75 advance, very similar to swing 2 we were just looking at, then the stock pulls back 8% in the next decline. The pullback is relatively shallow and then (the point I’m getting to with all of this) the next rally, made on better than expected deliveries for the quarter, (and better than average volume) push us above that level. We’re clearing bearish symmetry, we’re clearing that previous major high made on June 18th, and the next pullback (if you get one) is a buying opportunity. The pullback came 4 days later, and from there TSLA had 5 days of strength, good for a gain of $27.14 and the perfect duration for swing trading.
If you wanted to take this analysis a step further, now that we’ve cleared the bearish symmetry of this discussion, you’d go back and look at the same concept but on a weekly chart. This is where you look at symmetry in price on the bigger time frame to look at the next major swings and where they may find resistance. The two I’ll be watching are $278.32 and $308.71. 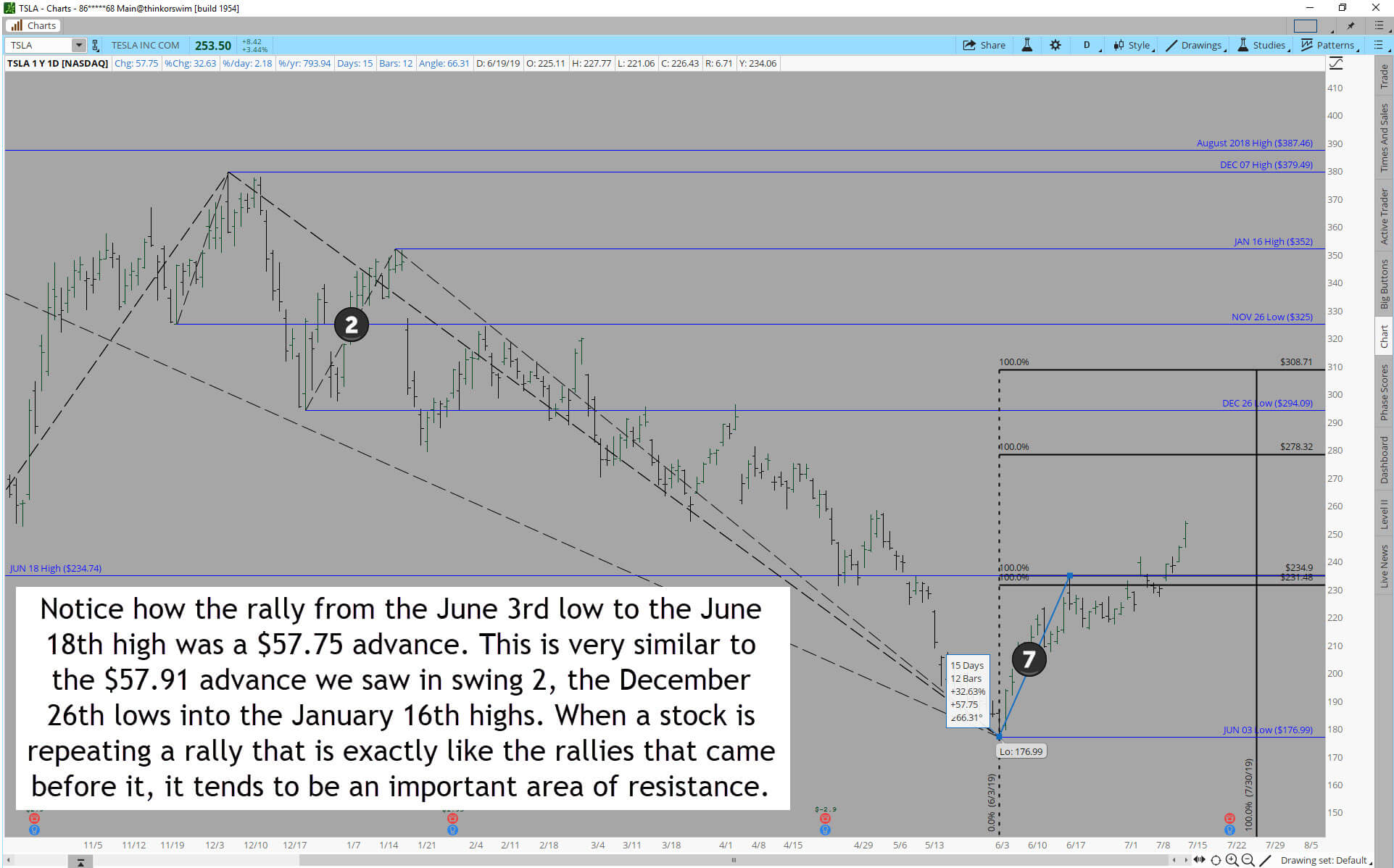