The Risk of Buying Breakouts

There are as many trading styles, principles, and methods as there are snowflakes in a Denver blizzard. So why am I addressing this particular one? Well, because it’s extremely relevant this week. Unless you have been hiding under a market rock, you are aware that the market has now sold off fairly sharply for 2 days… just after new highs were made.

Some would argue the Fed was the catalyst for this week’s sell off, and that certainly could have been the event that everyone was holding their breath for. However, today I will lay out the case that buying breakouts just for breaking out can provide short term profits but with elevated risk since they tend to not be ideal entry locations.

Let’s begin with the 30,000 ft view of the breakout concept: New highs in price means that there were enough buyers and buying pressure to push price into new territory. Then the fact that price had reached new highs acts as an advertisement to the rest of the market that this stock is being bought and supported into uncharted territory. In a vacuum this is correct, but in principle this initial breakout can be a lure and or a test.

See, when a stock price reaches into new high territory it’s like a mole sticking its head out of a hole and above ground level. It’s looking around to see if the coast is clear and safe to proceed. Will there be other buyers coming in behind those adventurous few? Will there be short sellers coming in to whack the mole?

If the momentum in the previous few days was strong enough, price can reach new highs on shear kinetic energy. Often this speed of ascent can look well supported on a lower time frame such as the 15 min chart, but then is completely unsupported on other time frames like the hourly or daily. 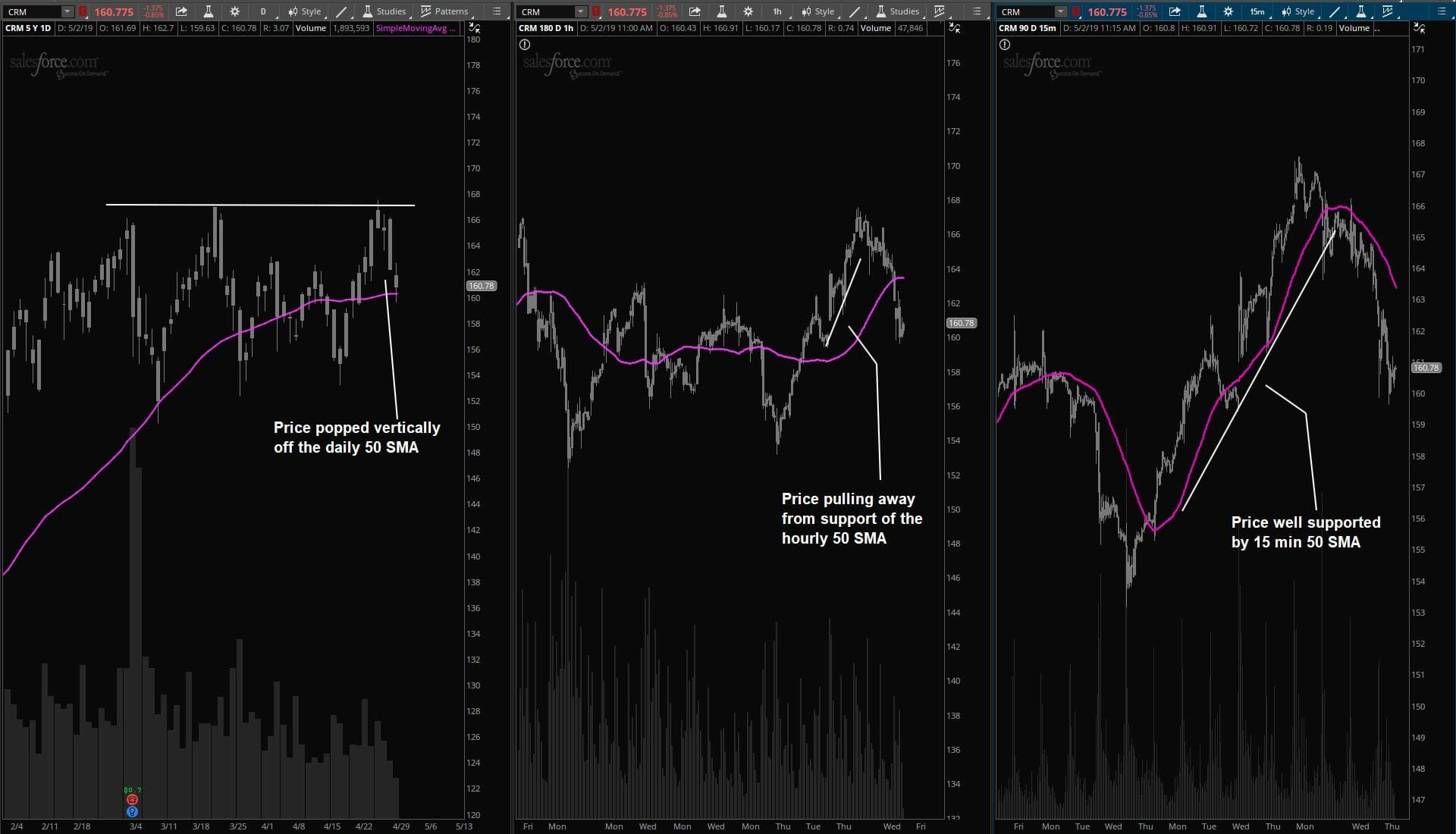 In my world, support is the 50 SMA and, in the picture above, you will see how CRM had a great run as it followed the 15 min 50 SMA up into new highs; A breakout. But what you will also see is that price on the hourly time frame pulled away from its 50 SMA, leaving price unsupported. Now take a look at the daily chart and see how price essentially went vertical compared that 50 SMA; extremely unsupported. 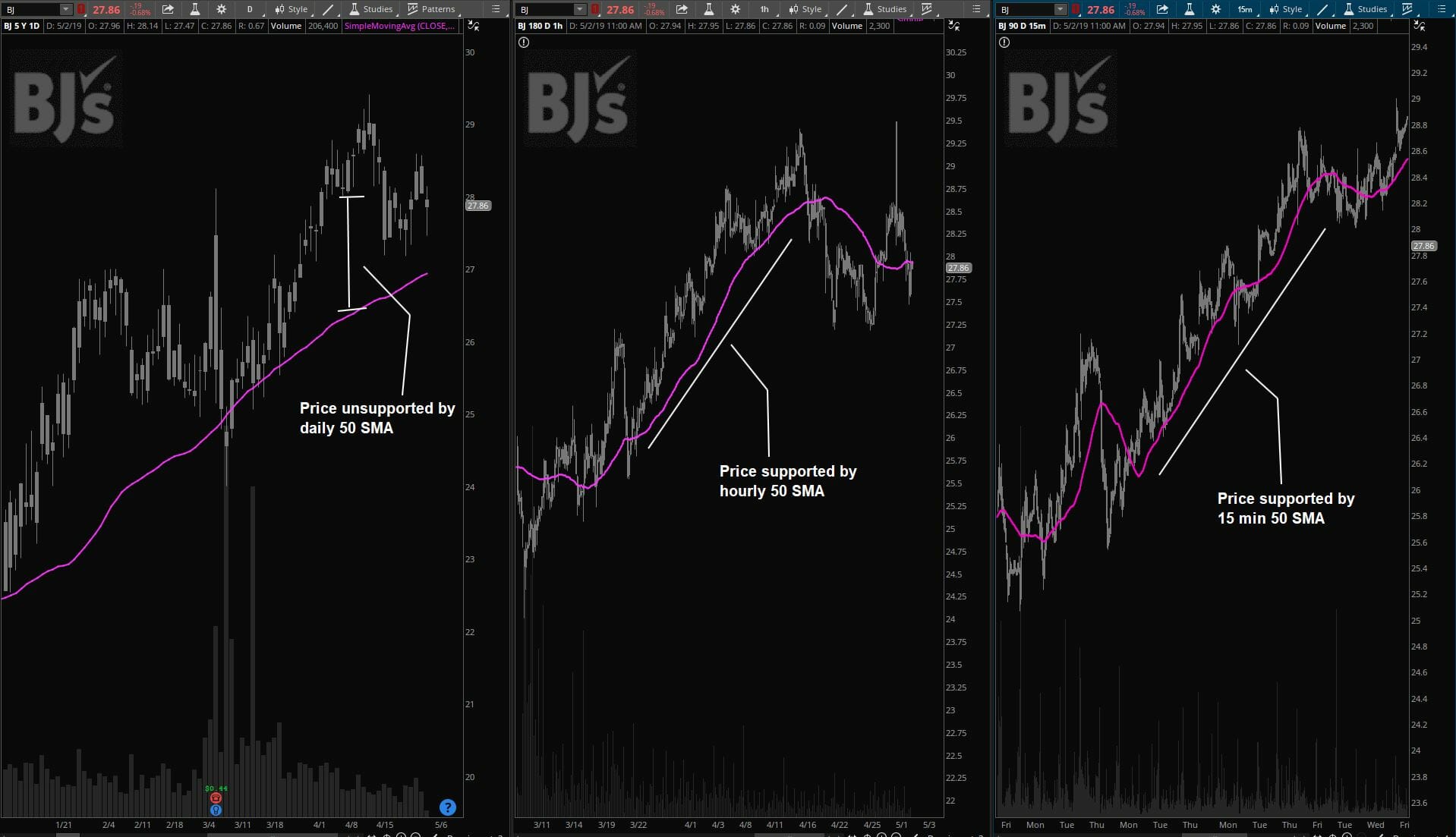 With the ticker BJ pictured above, you can see how price moved up and broke out in a more moderate fashion. Price generally followed both the 15 min and hourly 50 SMA up into new highs. Because the rate of ascent was more moderate and was now also supported by the stronger hourly 50 SMA, price was able to go higher for longer. Be sure to note though, that the rate of ascent was too much for the daily 50 SMA and a big gap had developed. Therefore I would have used the hourly 50 SMA as my exit and waited till price came down to the next level of support which appears to be the daily 50 SMA.

There are many layers to the breakout concept and I can’t cover them all here, but the point that I want to get across is that a breakout is noteworthy, so make a note of it. But you need to put it in context with how that breakout developed and if it can be bought for a quick move or if you need to wait for price to come back to stronger support for a better buy point.