Looking to 2019: Can the S&Ps Reverse This Bearish Trend?

Today, I went into the market with a bearish sentiment. Why? This is the last day of the year, and it’s hard to imagine major buy programs coming in with the market closing negative on the year. I wanted to play that with S&P futures, but my setup never really came through. Generally, when you are looking to short the market on the last day of the month, you want negative $ticks, a downtrending pattern, and internals such as the VIX and $VOLSPD confirming the trending move. These were not aligned today, so I decided to pass on the end of month short. It’s a good thing, too, because we ended up getting short covering into the close.

Well, the 2018 trading session is now over, and the stock market is closed, posting the worst year in over 10 years. I maintain my bearish sentiment, however, I’m finding it tricky on a short-term basis as we haven’t rallied far enough from the lows to get a lot of short trades with an edge, but yet I feel we are in the midst of a bull trap to the long side.

Additionally, I have a ‘feeling’ that the market will trade higher in the first few days of the year, due to investors wanting the low to be in, and dreaming of starting off the year on the right foot. Now, I know that isn’t a technical pattern but that is my hunch. However, that doesn’t mean the low is in. It’s also ALWAYS possible on an intraday basis to get a massive short covering rally (like what we saw last Thursday) due to the overall bearish sentiment. We won’t know that is coming till we see it in the internals and price action. But, this move higher could very well be a bull trap.

What’s a bull trap? That’s the moment where the market starts rallying off the lows (like it did last Wednesday) and everybody thinks it’s a great time to be long – when, in reality, it is just a reversion to the mean that is quickly faded. We haven’t seen how this move will end, just yet. But, you should know what we are looking for when it comes.

Right now, we have rallied back to the 8 EMA on the daily charts. This is a very weak reversal to the mean, and it’s typically a move I look to short. However, with a positive move today, it’s absolutely possible that we could trade into $2555 at the 21 EMA. I’m watching the lower time frame charts (such as the 30-minute chart) to keep me on the right side, as well as the market internals. 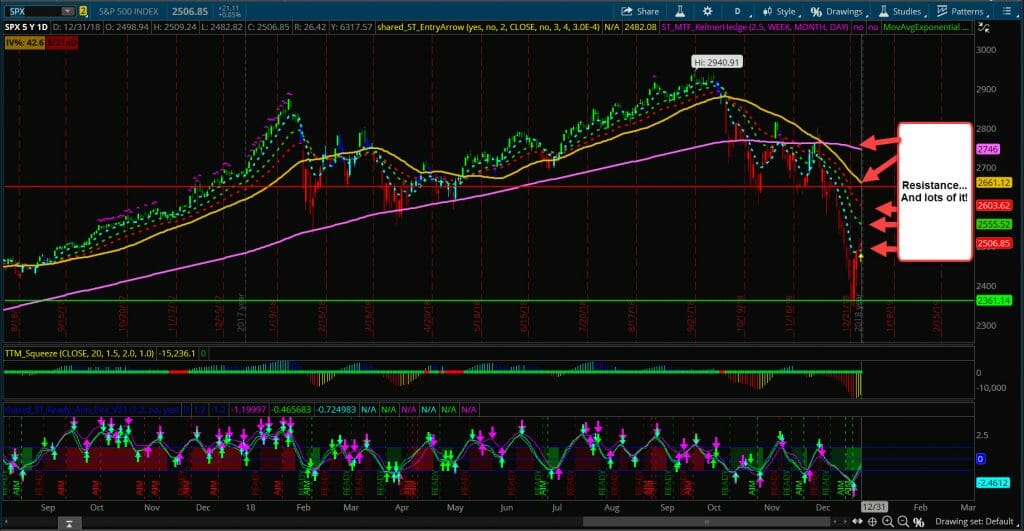 Please note all of the areas of resistance the market would have to break through, to resume a bullish trend. While not impossible, it’s also not likely to happen easily. These are the areas I am watching.

So, what is a trader to do? For me, this means I have positions on both sides of the market, and I’m focusing on short-term (think 2 weeks maximum) trades using conservative strategies (like butterflies and spreads).

I am being very cautious on the long side, focusing on butterflies in relative strength players such as COST and UNH. I also like healthcare as a whole, including MRK and PFE, especially on the weekly charts.

To the short side, I like the consumer discretionary and communications sectors to the downside. Within those, I like NKE, LOW, NFLX, TTWO and FB but maintain that they could rally a bit more before the short comes through. 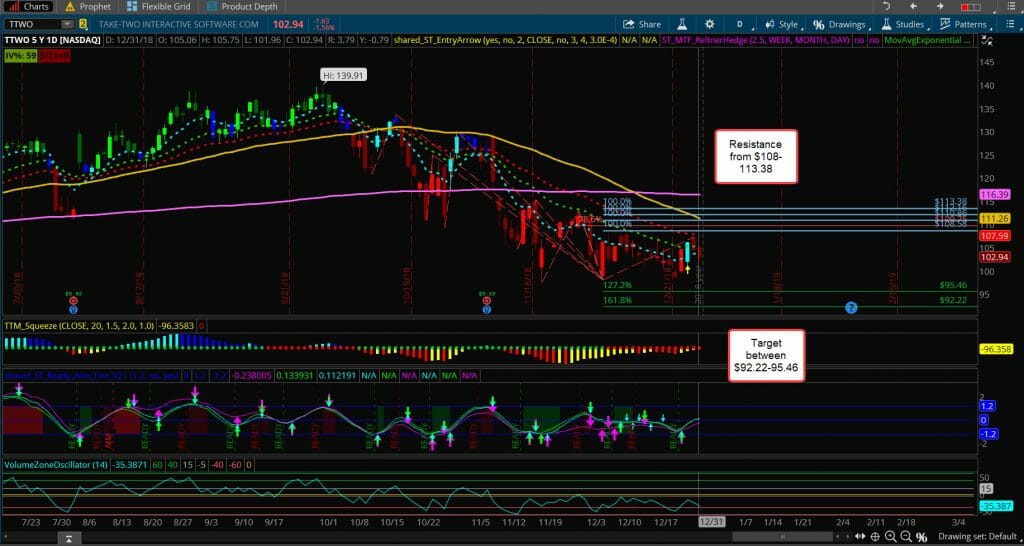 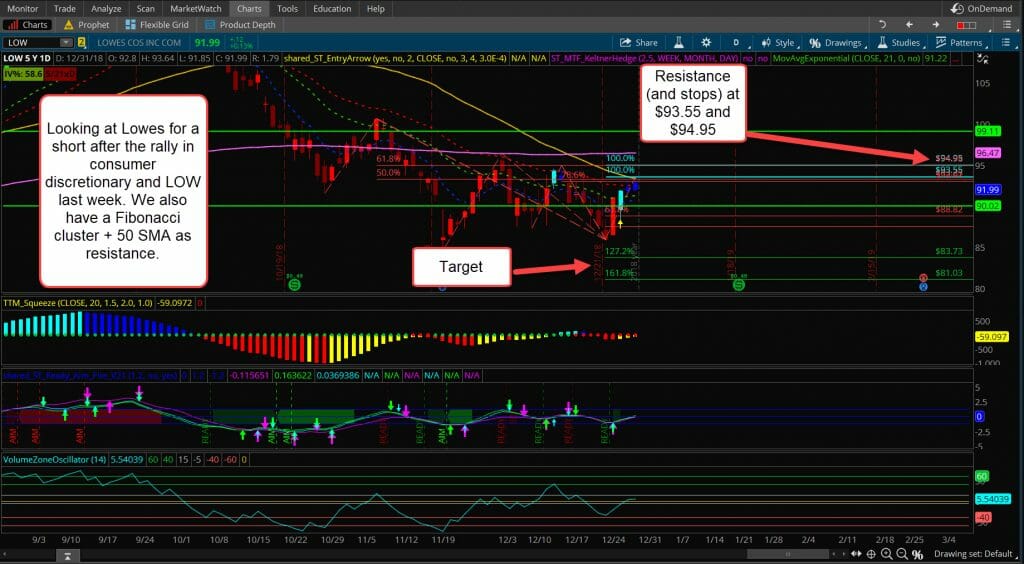 Keep in mind, the technicals are still incredibly broken down, but we can look for catalysts to trade higher on a short term basis and then possibly break resistance on the way up. One of the main arguments that fundamental traders use to stay the bullish course is that the fundamentals aren’t breaking down like what we are seeing in the technicals. I would argue that it doesn’t matter, that price rules – especially when price is being driven by emotionally based selling. On a short term basis, we are in a bearish trend.

However, positive news on the macro front, such as news on the trade war resolution, and this upcoming earnings season are the next potential catalysts I see for a possible break in overhead resistance that could lead to a repair in the technical patterns. It would have to be one of those, or a massive short squeeze like what we got last Thursday that is strong enough to break quite a bit of overhead resistance.

That’s what I’m looking for! I hope everyone has an excellent New Year’s Eve, and we will see you in 2019!