In our previous blog, we looked at some of the inflationary forces beginning to show up in the market. However, inflation is a lot like the slow erosion of wind; the results are drastic given a long enough timeline.

Let’s first look at some of the current inflationary signals.

First is a quarterly look at Gold. Notice a few points… the quarterly squeeze is in play, the MACD has positively crossed for the first time in years, and the RAF is now solidly above zero. 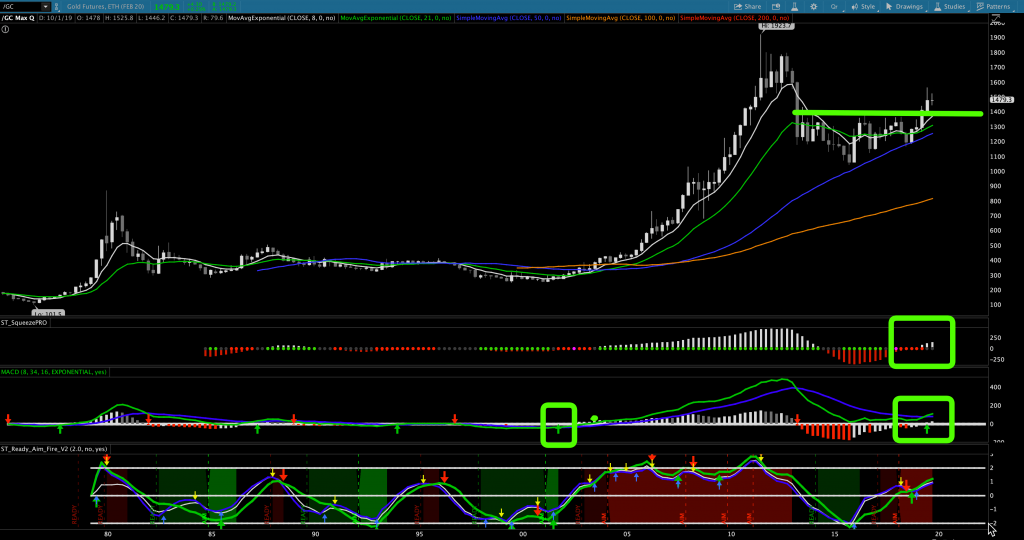 From a technical standpoint all of this is significant in indicating that gold prices have much higher to go. Reminder that a quarterly squeeze is good for 1-2 years of upward pressure.

Is this story specific to gold? It’s not, we see inflationary forces hidden elsewhere.

Let’s take the same look at TIPS as we did with gold.

In this chart we see that TIPS and gold have almost identical quarterly technicals.

In both cases we have a quarterly squeeze in play, positive MACD crossovers, and RAFs about the zero line. All of these signals are fresh and a pattern change from the previous years of data.

Why are TIPS important? Because they should move last in the chain of events and even they are starting to move. When the laggard starts to move, that gives validity to the larger narrative at play… the market is beginning to recognize the inflationary forces going forward.

Lastly, let’s take a look at inflation and its effects over a long sample size using something we are all familiar with… the Dow Jones Industrials.

What do you see? Well, the Dow priced in dollars has made two higher highs than the 2000 highs. Once in 2007 and again today as you read this blog. In dollar terms, the Dow is at all-time highs.

However, with the proper perspective and when priced in GOLD, we see a more sobering chart of the Dow. Priced in gold, the Dow is not even 1/3 of the way back to its 2000 all-time highs, much less made a new high.

This chart shows us that when we neutralize inflation by using gold as the currency, the Dow is actually significantly off the highs it made almost twenty years ago.

This is the power of inflation over time.

What does it all mean?

The dollar and all its fiat compatriots are declining assets. Since they are the measurement by which we measure everything else, it gives the appearance of higher and higher prices and wealth creation. However, if we use a stable measurement like gold to look at the same ideas, we get to see behind the curtain.

Based on the first two charts, gold and TIPS, I believe the inflation narrative is about to start running hot again after years of having laid seemingly dormant.

In reality, inflation was never dormant, it was simply hidden.

If the first two charts are an indication of the long-term trajectory of this dynamic, the angle of descent of dollars and fiat currencies in general is about to steepen greatly over the coming years.

The trade is hard assets priced in dollars… so stocks, gold, silver, real estate, and eventually Bitcoin are places to focus as the central banks crank the printing presses going forward.