Sectors to Watch this Holiday Season - The Reflation Trade

Stocks are at an all-time high fueled by an accommodative Fed, improving trade war sentiment, and a steepening yield curve.

What do all three of these things have in common?

They are all major contributors to the resurgence of the “Reflation Trade.”

The Reflation Trade refers to the idea that all the easy money from Fed, and the order flow based on that, will go to sectors that benefit the most from the sentiment change.

Some of these sectors have been relatively out of favor recently because of the market fear around the trade war, etc. Now that the yield curve is positive, that the Fed has shown a willingness to accommodate for longer, and the China trade deal is seemingly more benign, I expect these unloved sectors to play catch up to the rest of the market.

First up, let’s look at the “ocean” or the SPY index which tracks the market. The main focus is that we have a weekly Squeeze on SPY and a bullish orientation. When this weekly Squeeze fires long, it should drive the entire market higher. 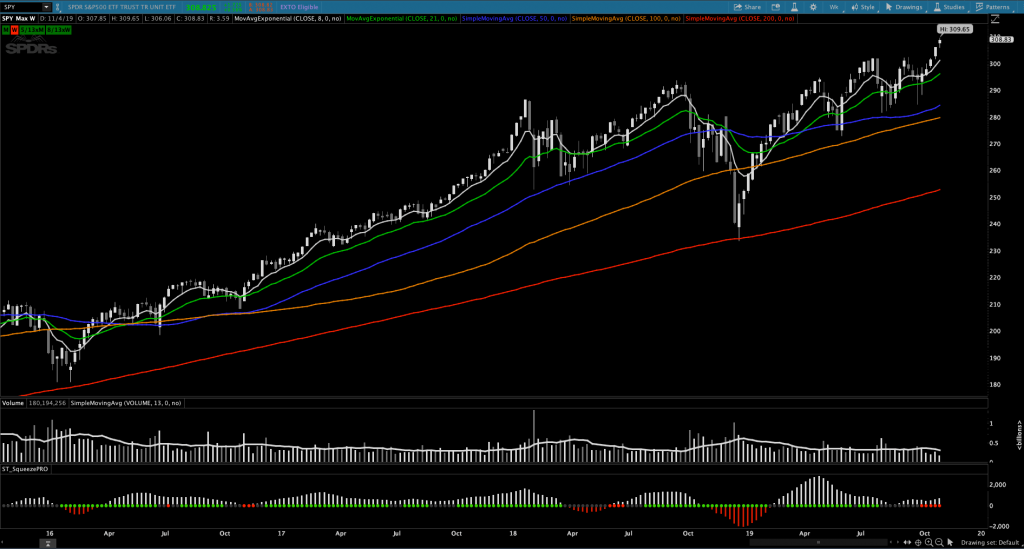 Now let’s look at some of the specific sectors that I believe will play catch up with the “Reflation Trade.” First up is industrials, or XLI. 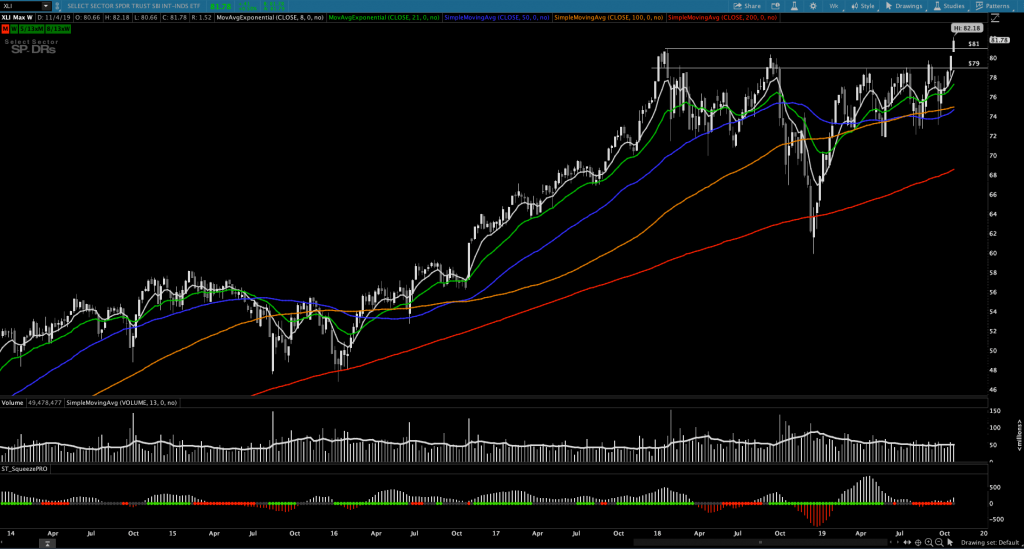 Here we see the industrials have a similar setup to the SPY. Same weekly Squeeze and attempting to break out to new highs.

The Reflation Trade works well for industrials because it implies a time of synchronized global spending and growth, which is a key driver for the industrial space.

Some of the largest XLI components include CAT, DE, BA.

Next up is the materials sector, or XLB. The idea behind the materials moving higher is predominately the easy money from all central banks and the mitigation of China trade war fears. This sector has been completely out of favor all year, however, that may be a good thing as the idea behind the Reflation Trade is that the relative underperformers will play catch up when the SPY weekly Squeeze fires. 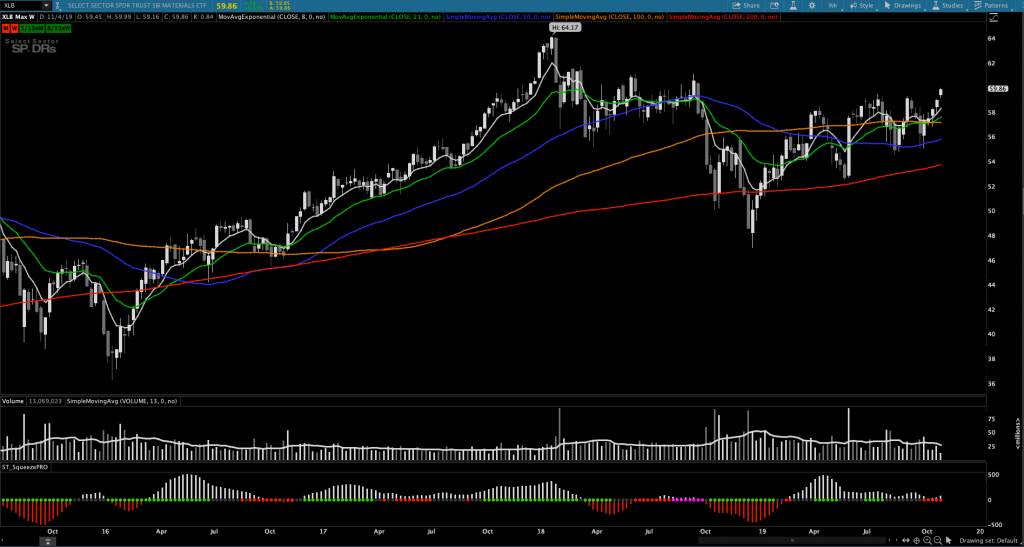 Comparing the XLB chart to SPY we can see that XLB is more bearishly positioned, but that is expected as it has been relatively underperforming the market. The setup is bullish for continuation higher. If there is an immediate resolution to the trade war, this sector stands to benefit tremendously.

Some of the largest components of XLB include DD, APD, LIN.

Lastly, we have the retail sector, or XRT.

This chart is the weakest of the group, but also stands to benefit from money rotation from the relative winners to the relative underperformers.

The retail sector is one that has been largely left for dead. However, with the idea of the Reflation Trade in mind, this sector also stands to benefit as traders exit their retail shorts and other traders drive the market higher, as it has a lot of room to catch up to SPY on a year to date basis.

The idea behind the Reflation Trade is simple: central banks collectively easing monetary policy, reduced fear around the China trade war, significantly improved yield curve, and money rotation within the market from the previous winners to the underperformers.

Keep an eye on crude oil for signs that the Reflation Trade is working.

Sectors that stand to be hurt by this dynamic are anything that is defensive: utilities, staples, bonds, Yen, etc.

This dynamic sets up a “Goldilocks” scenario for stocks from now until the end of the weekly SPY Squeeze that can drive the entire market significantly higher and drive some of the previously under-owned sectors much higher, too.