Analyzing the Transport Industries for Hints about Market Behavior

Automotive Heading Higher? Not Quite.

Lately, there has been a lot of talk in the news about car companies, particularly GM and TSLA, as regular tweets send them into the limelight. Let’s look at the automotive industry, and airliners in this breakdown.

With GM reporting positive earnings, sending the stock higher, it makes sense that investors would question if it’s a good time to buy GM stock. For me personally, I say no. Why? Well, GM may be ‘making the switch,’ and beginning to trade higher, but overall, it’s in a downtrend with a lot of overhead resistance. What does that mean? It’s like a hiker trying to climb a steep mountain with a 75 lb backpack. Yes, it’s possible, and I can see it happening, but it won’t be easy. Let’s look at the chart: 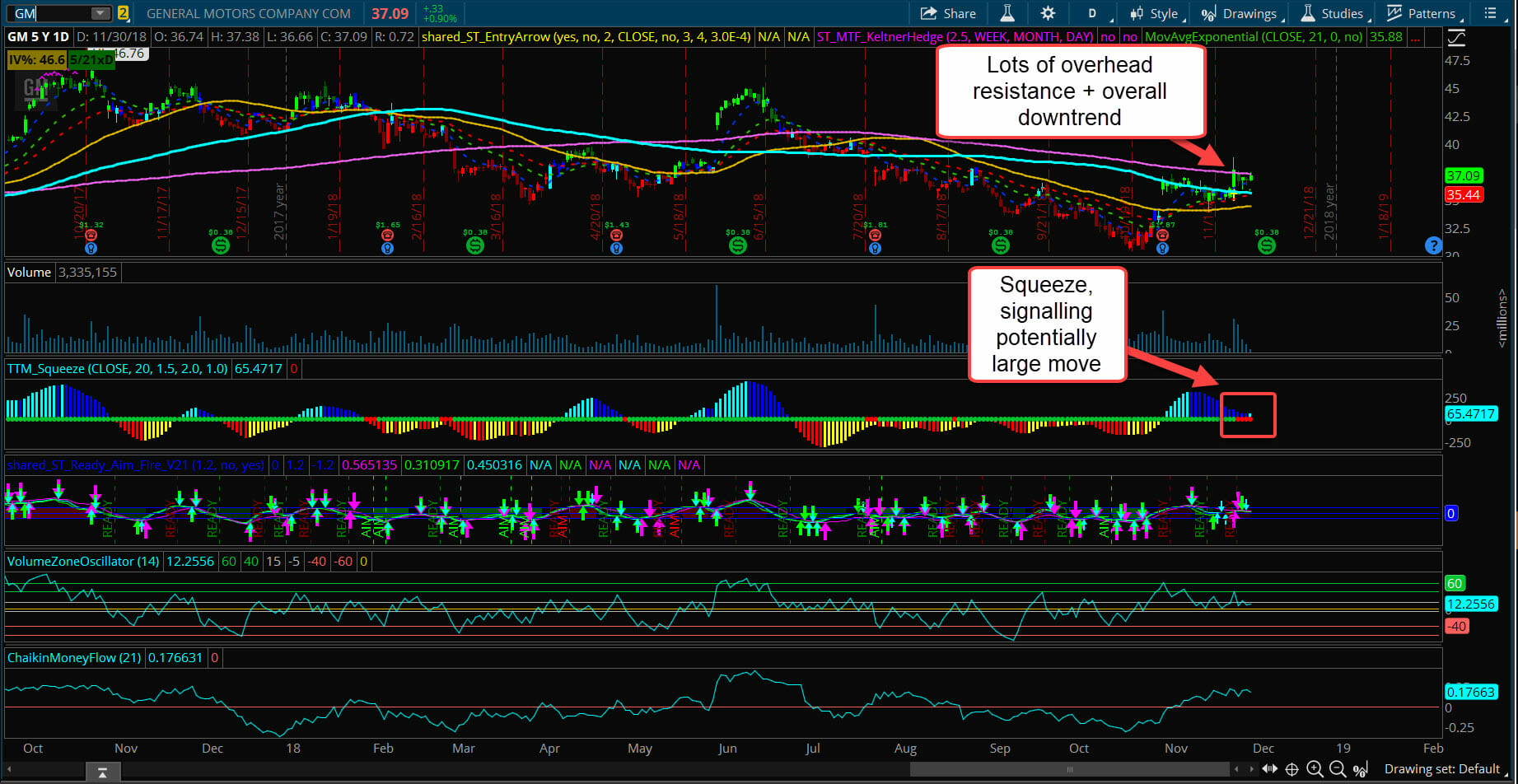 The green color of the candles, in combination with the fact that it traded off of the lows and broke through multiple areas of resistance, shows that a rally into about $40 in the short-term is possible. Especially, coupled with the squeezes, shows that we could trade higher from here. But, like I said, it’s an uphill battle, which tells me I’d rather put my cash somewhere else.

Car companies have had a nice boost after Q3 earnings, but resistance overhead is heavy. We are also at all-time consumer debt highs, with rising interest rates and rising tariffs. Not a great time to buy cars – or their stock. I think the earnings pop will soon fade – especially with Trump trying to start a fight with GM over closed plants and subsidies. I don’t like touching anything that is affected by Trump Tweets.

Additionally, when looking more closely at the automotive industry, I noticed the inverse relation of auto parts suppliers with auto sellers. What does that mean? Advance Auto Parts (AAP) and O’Reilly Automotive Inc. (ORLY) continue to trade higher, while car companies trade lower. What does that mean in the big picture? People are fixing their cars – not buying new ones. Fiat Chrysler Automobiles (FCAU), Ford Motor (F) and GM don’t look like long-term buys to me. If you want to trade them for a countertrend long for a short while, I can see that, but I don’t see a complete trend reversal that ends with these stocks making new highs. It may be tempting because they are cheap, but I’d stay away (unless you’re looking at TSLA!). I do however, like auto supplier stocks like AAP and ORLY. Let’s look at a chart of AAP: 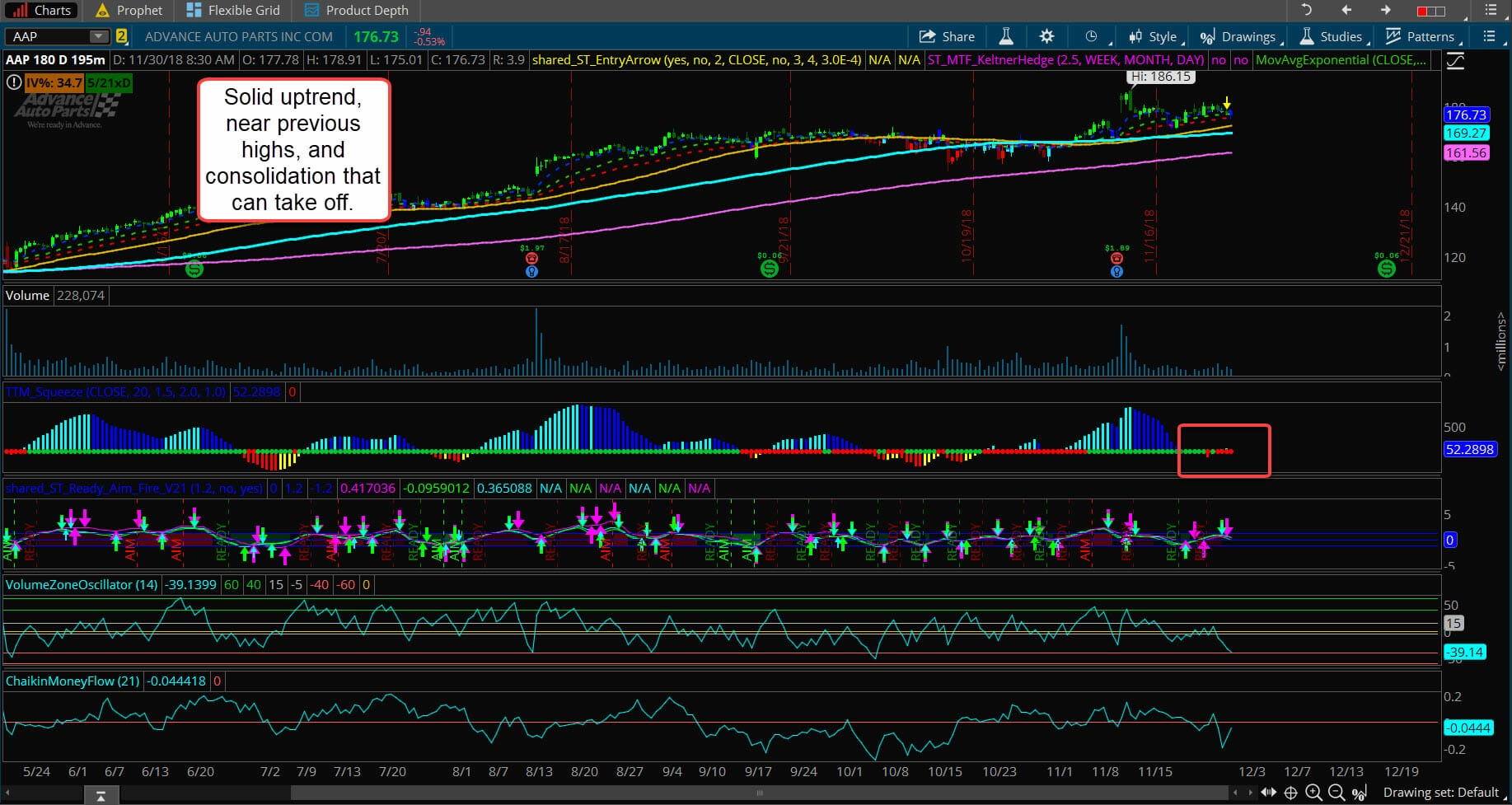 On this chart, you can see that it is in an uptrend. We can see green GrAB candles, price above the moving averages, and a squeeze forming.

The Case with Tesla

TSLA is the rare breed in automotive, as it is the face of the future of transportation. Tesla’s technology along with Elon’s vision keep it continually growing and changing, and showing the world the way of the electric car. Similarly affected by tweets, in combination with a constant barrage of short sellers messing with the stock., this makes TSLA one of my least favorites on a short-term, trading perspective, I still like it for a long-term buy (or aggressive, short-term buy, if you’re so inclined – I am not).

From a technical standpoint, TSLA is showing consolidation on the weekly and monthly charts. I for one, think this breaks out to the upside and I’m looking for a price target on TSLA at $450. I don’t like trading TSLA on a short term basis, as a single tweet from Elon sends it moving one direction or another, For some reason, shorts want TSLA to fail but I think TSLAs will be the way of the future.

Boeing (BA) is an interesting case because it is experiencing an oversold bounce, which, in the short-term, makes a good long options trade. However, in the longer-term, I am looking for industrials and transports to trade lower – but, watching these key levels to tell me a trend-shift is occurring. Out of the airplane suppliers, I would stick with BA, over something like Airbus, but you need to look at the overall picture.

XLI, the Sector SPDR Industrial Sector doesn’t have many names that look to trade higher. We are experiencing an oversold bounce, and this could potentially turn into a shift in overall pattern. But, as of right now, it’s just a rally back to the mean in a downtrend. IYT, along with XLI, the iShares Transportation Average ETF, are showing small signs of life to the upside but this is still not a confirmed uptrend.

Check out this daily chart of the IYT – iShares Transportation Average ETF. 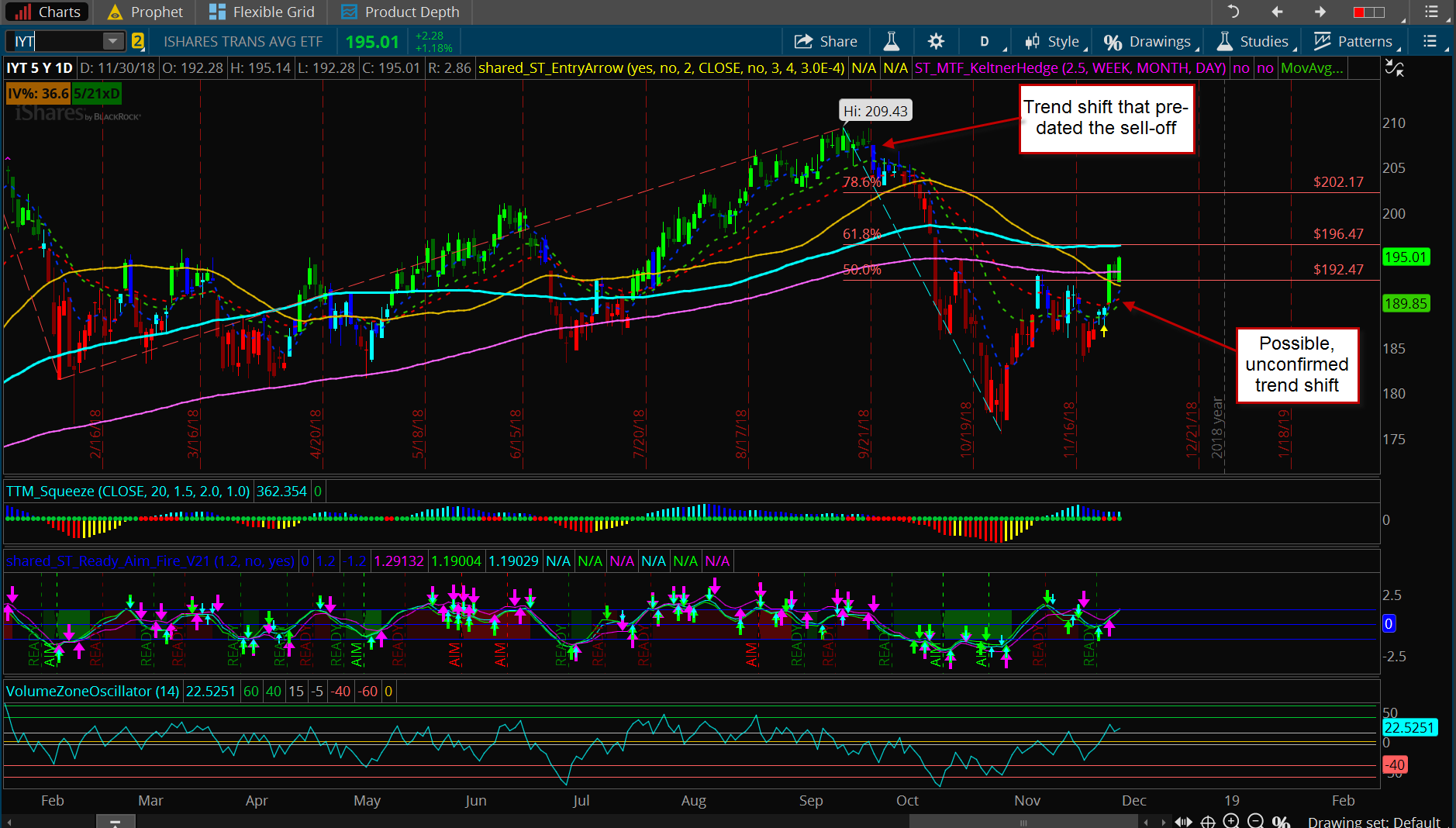 Typically, a move in the transports will give us a heads up about overall market direction. I’m looking at $196.47 as a key level of resistance. With a failure here, I look for confirmation that the downtrend in stocks is in-tact. A break of this level is a signal of a continued rally higher in stocks.

A slow down in transports and industrials is also a critical factor in a fading economy. This should be watched closely. Conversely, a trend-shift may be seen here first. Additionally, anything in the industrial sector that is affected by tariffs, I like to avoid to the long side until the high risk of news related moves softens up. What could change this view? A G20 conclusion on tariffs that would cause heightened investor confidence, and/or a giant short squeeze.

While I’m not looking at car or airplane manufacturers for bullish trades, I do like airliners. With low oil prices, coupled with seasonality, companies like Delta Airlines (DAL), Spirit Air (SAVE), and United Airlines (UAL) are doing quite well and look to continue trading higher the rest of the year. So, I’m not buying the companies that make the planes, but, the ones that make money flying them, look good for now!

Want more analysis? Each week, Danielle answers questions from members, posts market analysis and stock picks at Simpler Foundation and in our Simpler Options chatroom. In Check out Simpler Foundation HERE. You can also follow her on Twitter @traderDanielle.